The CERT National Insider Threat Center (NITC) Insider Threat Incident Corpus contains over 2,000 incidents, which, as Director Randy Trzeciak writes, acts as the "foundation for our empirical research and analysis." This vast data set shows us that insider incidents impact both the public and private sector, with federal government organizations being no exception. As Carrie Gardner introduced in the previous blog post in this series, federal government organizations fall under the NAICS Codes for the public administration category. Public administration, in this context, refers to a collection of organizations working primarily for the public benefit, including within national security. This blog post will cover insider incidents within federal government, specifically malicious, non-espionage incidents. 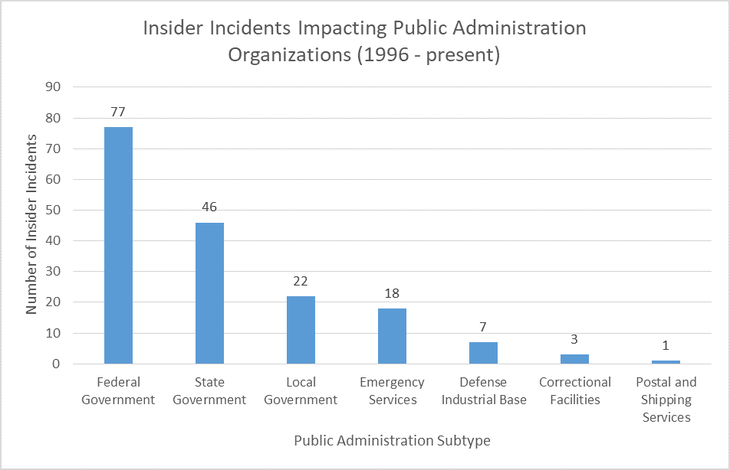 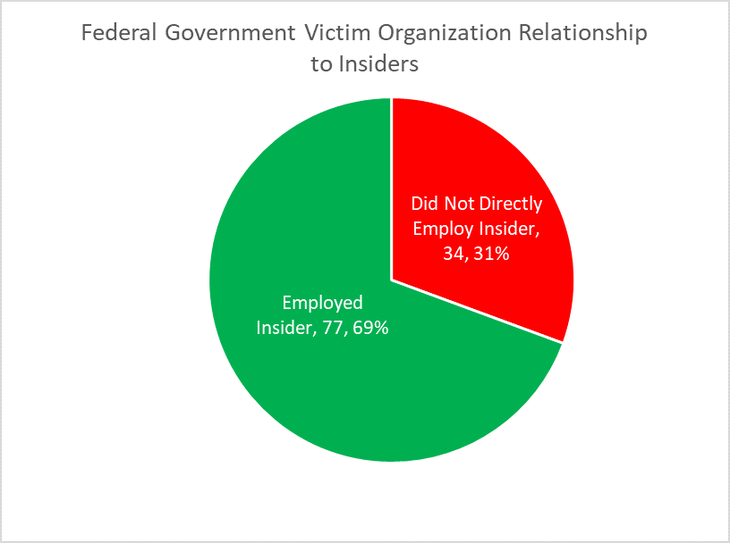 Insider incidents in the federal government rarely include IT Sabotage or Theft of Intellectual Property (IP). In part due to the nature of the federal and national security operating environment, so few cases are categorized as IT Sabotage or Theft of IP because incidents involving classified information are typically considered (or prosecuted as) national security espionage. 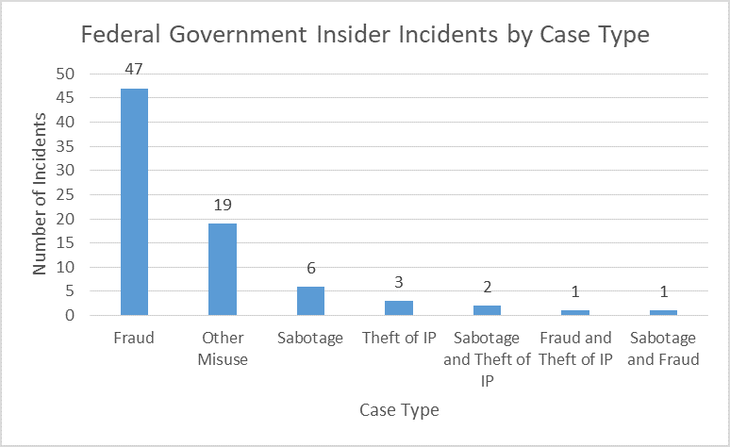 Given how few reported incidents involved IT Sabotage or Theft of IP, the following analyses focuses on incidents of Fraud and "Other Misuse". Incidents of Other Misuse by insiders can be described as those incidents that involve the unauthorized use of organizational devices, networks, and resources that are not better classified as Theft of IP, IT Sabotage, or Fraud. Representative examples of Other Misuse include the use of organizational resources for personal benefit, to violate the privacy of other individuals (e.g., obtaining access to colleagues' emails without consent or a proper business purpose) or to commit another kind of cyber-related crime (e.g., stalking or purchasing drugs), which in turn violate organizational policies.

Over half (60.8%) of incidents impacting federal organizations involved Fraud. In theory, this is not necessarily surprising given the well-documented efforts to combat issues of fraud, waste, abuse, and mismanagement of federal funds. To that end, the Insider Threat Incident Corpus reflects those efforts. The Fraud statistics include only incidents where no other incident type was known and, for each attribute (i.e., Who, What, When, Where, How, Why), take into account only cases where that attribute was known. 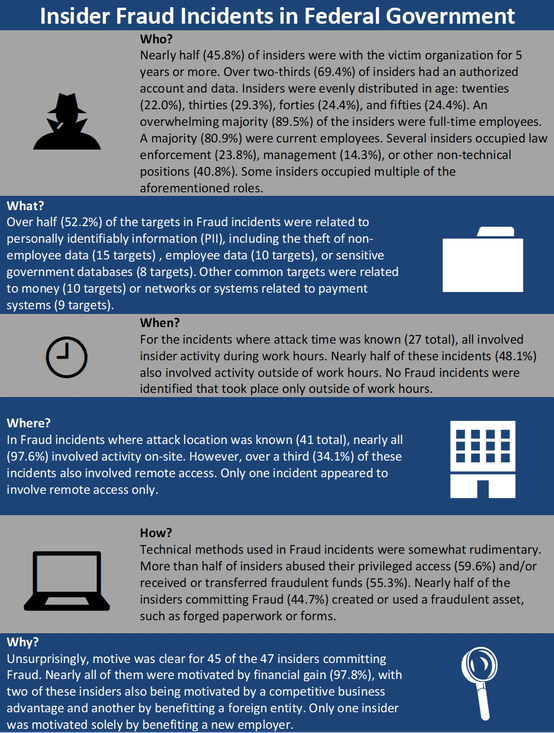 Other Misuse was the second-most common form of insider threat in federal government. These incidents generally involved insiders abusing access to devices or systems for reasons not including financial gain (often the case in Fraud or Theft of IP) or revenge (typical in IT Sabotage). While these incidents are not typically related to an immediate loss of revenue or system availability, they have potential to cause reputational damage to or generate liability concerns for an organization. 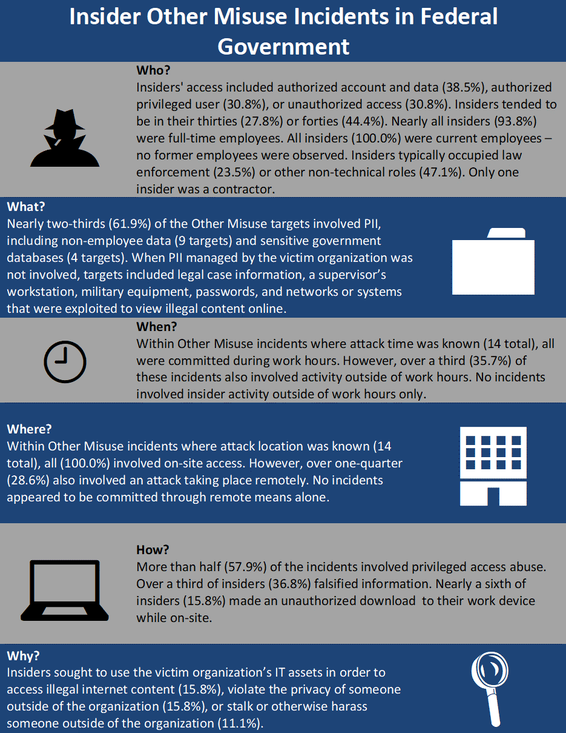 Perhaps the most notable feature of insider incidents within federal government was how prevalent incidents of Other Misuse were compared to other sectors. Although one-third (33.3%) of the Other Misuse incidents in the CERT NITC Insider Threat Incident Corpus took place in federal government organizations, federal government incidents as a whole represent only about 8.0% of the malicious, non-espionage corpus. Insiders committing Other Misuse generally did so in the furtherance of an additional crime (e.g., stalking an individual using employer-owned information systems), which made motive clear in all but one incident. Given the small sample size of insiders committing Other Misuse (19), claims cannot yet be made about the significance of any of the patterns or statistics described above. Indeed, Other Misuse incidents may be composites of other distinct incident patterns and the technical methods used simply reflect that. Financial impact was unknown in most (84.2%) incidents of Other Misuse. Of course, insider incidents can have more than just a financial impact. For instances where an insider was stalking an individual, that could have resulted in a real compromise of a victim's personal safety. In at least one of these incidents, in an instance where the insider had access to medical records, the insider's actions delayed the delivery of vital healthcare.

Although not every insider incident impacting the federal government will be at the level of national security espionage, incidents are still worthy of attention and study. Looking at these insider incidents - where for instance the cleared employees are the most vetted, are the most trusted, and have among the most sensitive access to information - we can glean insights into cybersecurity best practices to mitigate insider threat, including the importance of being attuned to employee behavior. Organizations in all industries can (re)consider to whom they give access to information that can be used to harm the organization directly, vis-Ã -vis fraud, or indirectly by violating the privacy and safety of third parties. Overall, these incidents underscore the need for robust auditing functionality to identify when previously "good" employees start to go "bad."

Stay tuned for the next post, in which we spotlight the Financial Services sector, or subscribe to a feed of the Insider Threat blog to be alerted when any new post is available. For more information about the CERT National Insider Threat Center, or to provide feedback, please contact insider-threat-feedback@cert.org.

Entries in the "Insider Threats Across Industry Sectors" series:

Send a Message to Carrie Gardner