Continuing our industry sector series, this blog post highlights insider threat trends in the State and Local Government subsector and explores distinct characteristics of fraud, the most common insider case type in the CERT Insider Threat Corpus for this subsector.

Only 19 states require by statute that their state-run institutions maintain some level of cybersecurity readiness to protect their sensitive data. These statutes generally prescribe that state institutions implement and maintain security practices and procedures for data protection. Some of these state measures additionally mandate periodic security audits or employee awareness training. While these measures seem to be a good-faith effort to support information assurance, none of the statutes specifically acknowledge or address threats from authorized users--insider threats.

Some of the state and local government organizations that are victims of insider incidents include state departments of motor vehicles, courts, police departments, and health care programs. The graph below lists the breakdown of the 87 cases in the State and Local Government subsector in which organizations were direct victims of an insider threat attack. 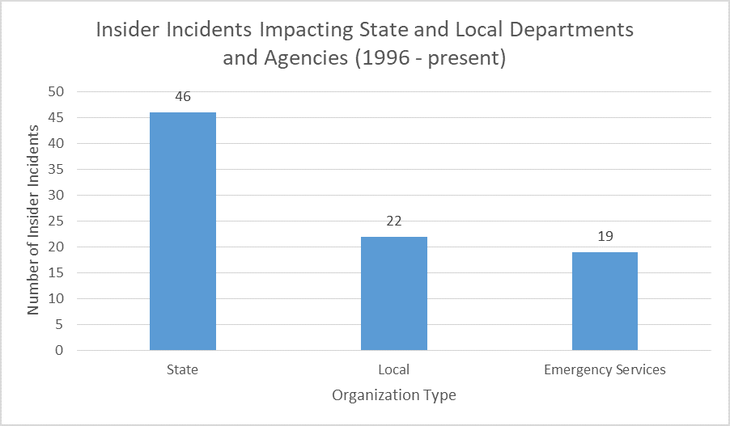 In addition to the 87 incidents where the organizations involved directly employed the insider, we identified 16 cases where there was an incident in the State and Local Government subsector involving a Trusted Business Parter (e.g., contractors or temporary employees). 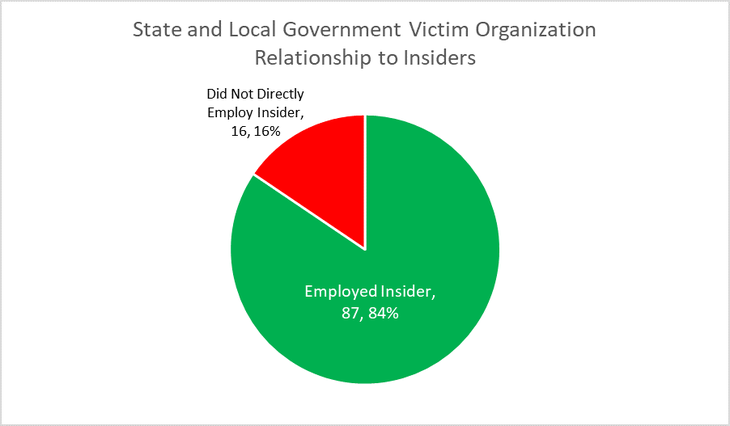 The most frequent insider incident case type in the State and Local Government subsector is fraud, occurring in 77% of incidents. These findings are consistent with findings in the Federal Government subsector of public administration. In these fraud incidents, we see insiders with access to sensitive data, such as personally identifiable information (PII), attempting to illegally profit by selling the data or their authorization to handle sensitive data or systems.

In both scenarios, the insider abused their authorization to impact the confidentiality or integrity of sensitive data or systems. 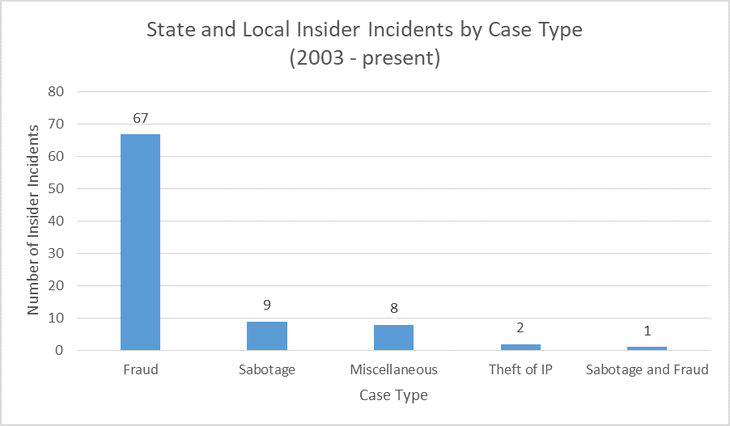 We summarize the findings from these fraud incidents below. These statistics consider only incidents where the case type is exclusively fraud and the industry subsector is either State Government, Local Government, or Emergency Services. 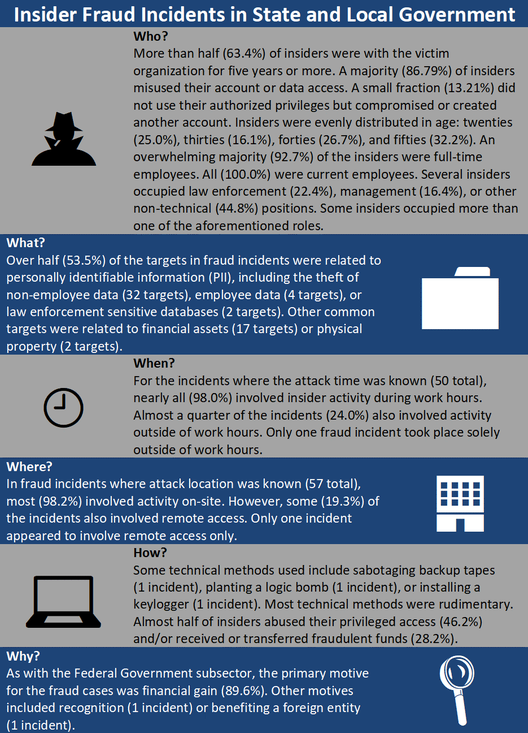 The majority of insider incidents in the State and Local Government subsector of public administration occur due to the insider's authorized access to sensitive data. The unauthorized use of access can make it difficult for employers to differentiate activity that is potentially malicious from activity that is characteristic of typical job functions. Some specific best practices that organizations can use to mitigate insider threats include auditing employee activity such as database searches, monitoring the movement of monetary funds, and auditing the creation and modification of user accounts.

Stay tuned for the next post, in which we spotlight the Information Technology sector. Or subscribe to a feed of the Insider Threat blog to be alerted when any new post is available. For more information about the CERT National Insider Threat Center, or to provide feedback, please contact insider-threat-feedback@cert.org.

Entries in the "Insider Threats Across Industry Sectors" series:

Send a Message to Carrie Gardner