The use of machine learning (ML) could improve many business functions and meet many needs for organizations. For example, ML capabilities can be used to suggest products to users based on purchase history; provide image recognition for video surveillance; identify spam email messages; and predict courses of action, routes, or diseases, among others. However, in most organizations today (with the exception of large high-tech companies, such as Google and Microsoft), development of ML capabilities is still mainly a research activity or a standalone project, and there is a dearth of existing guidance to help organizations develop these capabilities.

Integrating ML components into applications is limited by the fragility of these components and their algorithms. They are susceptible to changes in data that could cause their predictions to change over time. They are also limited by mismatches between different system components.

For example, if an ML model is trained on data that is different from data in the operational environment, field performance of the ML component will be dramatically reduced. In this blog post, which is adapted from a paper that SEI colleagues and I presented at the 2019 Association for the Advancement of Artificial Intelligence (AAAI) fall seminar (Artificial Intelligence in Government and Public Sector), I describe how the SEI is developing new ways to detect and prevent mismatches in ML-enabled systems so that ML can be adopted with greater success to drive organizational improvement.

The Sources of Mismatches

One challenge in deploying complex systems is integrating all components and resolving any system-component mismatches. For systems that incorporate ML components, the sources and effects of these mismatches may be different from other software-integration efforts.

Apart from software engineering considerations, the expertise needed to field an ML component within a system frequently comes from outside the field of software engineering. As a result, assumptions and even descriptive language used by practitioners from these different disciplines can exacerbate other challenges to integrating ML components into larger systems. We are investigating classes of mismatches in ML systems integration to identify the implicit assumptions made by practitioners in different fields (data scientists, software engineers, operations staff) and find ways to communicate the appropriate information explicitly. To enable ML components to be fielded successfully, we will need to understand the mismatches that exist and develop practices to mitigate the consequences of these mismatches.

We deﬁne an ML-enabled system as a software system that relies on one or more ML software components to provide required capabilities, as shown in Figure 1. 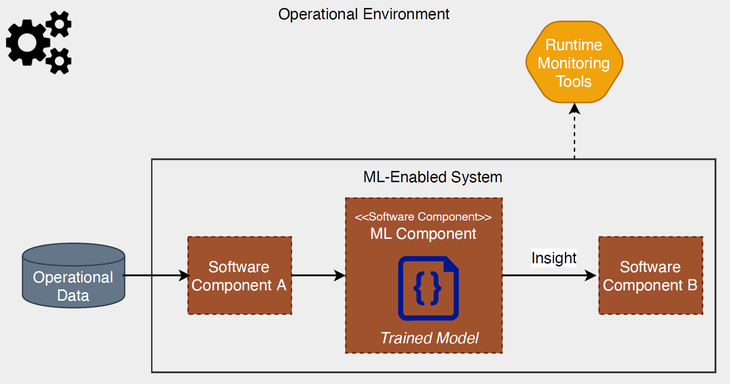 Figure 1: Elements of a Deployed ML-Enabled System and Operations Perspective

These three perspectives operate separately and often use different terminology. As a result, there are opportunities for mismatch between the assumptions made by each perspective with respect to the elements of the ML-enabled system--the non-human entities involved in the training, integration, and operation of ML-enabled systems--and the actual guarantees provided by each element. This problem is exacerbated by the fact that system elements evolve independently and at different rhythms, which could over time lead to unintentional mismatch. In addition, these perspectives are likely to belong to three different organizations.

Late discovery of implicit and inconsistent assumptions about ML and non-ML elements of ML-enabled systems causes misbehavior and costly rework. Here are some examples:

Based on the above, we define an ML mismatch as a problem that occurs in the development, deployment, and operation of an ML-enabled system due to incorrect assumptions made about system elements by different stakeholders that result in a negative consequence. The different stakeholders in our example are data scientist, software engineer, and release (operations) engineer. ML mismatch can be traced back to information that could have prevented problems if it had been shared among stakeholders.

Large high-tech companies, such as Google and Amazon, have addressed the ML mismatch problem by putting one team in charge of all three functions for a specific AI/ML microservice. Although this approach does not make the assumptions more explicit, it does solve some of the communication problems. In essence, developing an AI/ML model is a statistical problem that is relatively fast and cheap; but deploying, evolving, and maintaining models and the systems that contain them is an engineering problem that is hard and expensive.

The SEI is developing machine-readable ML-enabled-system element descriptors as a way of detecting and preventing mismatches. The goal of these descriptors is to ease adoption of ML systems by codifying attributes of system elements and therefore making all assumptions explicit. The descriptors would then be used by system stakeholders manually for information, awareness, and evaluation; and by automated mismatch detectors at design time and runtime for cases in which system attributes lend themselves to automation.

Benefits that we anticipate from this work include the following:

As the work progresses, we expect to learn answers to questions such as

Phase 1, Information Gathering: As shown in Figure 4, this phase involves two parallel tasks. In one task, we elicit examples of mismatches and their consequences from practitioners through interviews. In the second task, we identify attributes currently used to describe elements of ML-enabled systems by mining project descriptions from GitHub repositories that contain trained and untrained models, a white literature review, and a gray literature review. This multi-modal approach provides both the practitioner and the academic perspective on how to describe ML-enabled system elements. 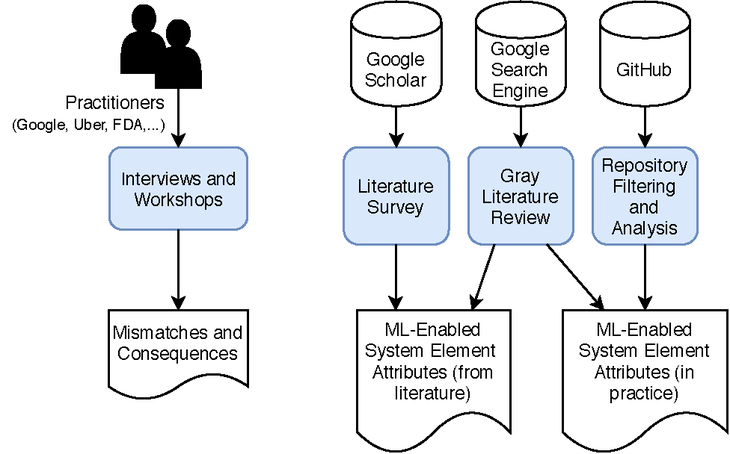 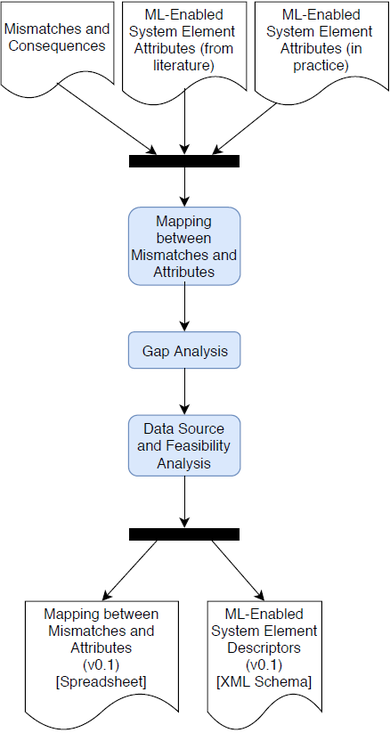 Phase 3, Evaluation: As shown in Figure 7, in this phase, we re-engage with the interview participants from the information-gathering phase to validate mapping, data sources, and feasibility. The evaluation target is a 90 percent agreement on the work developed in the analysis phase. We also develop a small-scale demonstration of automated mismatch detection, identifying mismatches in a project that can be detected through automation, and developing scripts that can detect the mismatch. In the end, the expected outcomes of this work are the validated mapping between mismatches and attributes, a set of descriptors created from that mapping, and instances of the descriptors. 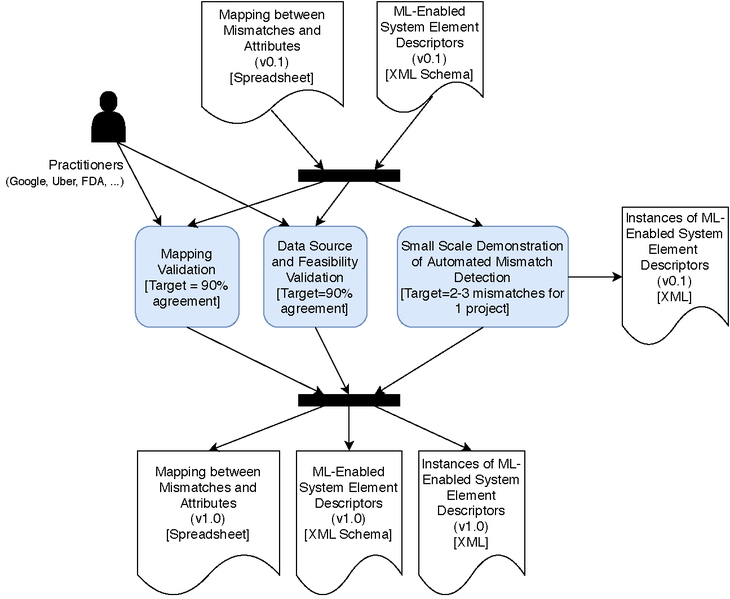 Looking Ahead to Next Steps

As a result of our work, we envision communities beginning to develop tools for automatically detecting ML mismatches and organizations beginning to include mismatch detection in their toolchains for developing ML-enabled systems. As a step in this direction, we are working on the following artifacts:

Through the interviews I described in the information-gathering phase, we plan to socialize the concept of mismatch and convey its importance for the deployment of ML-enabled systems into production; elicit and conﬁrm mismatches in ML-enabled systems and their consequences from people in the ﬁeld; and obtain early feedback on the study protocol and resulting artifacts. If you are interested in sharing your examples of mismatch or in developing tools for mismatch detection, we encourage you to contact us at info@sei.cmu.edu.

Read the SEI blog post, The Vectors of Code: On Machine Learning for Software.

Read the paper, Component Mismatches are a Critical Bottleneck to Fielding AI-Enabled Systems in the Public Sector by Grace Lewis, Stephanie Bellomo, and April Galyardt.