As shown by the following figure, there are two types of virtualization via VMs, based on the type of hypervisor used: 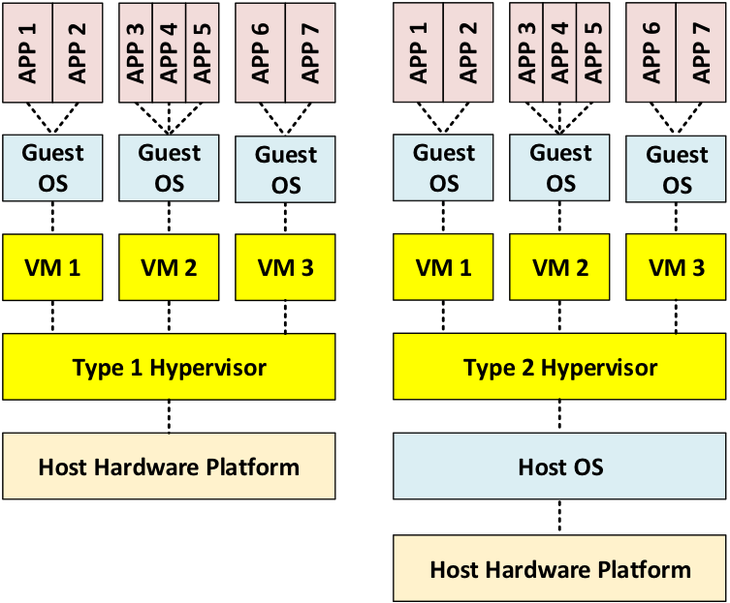 VM Virtualization via a Type 1 Hypervisor

By providing additional details, the notional diagram below shows how 14 software applications running on various guest operating systems have been deployed onto 7 virtual machines running on a type-1 hypervisor. This diagram also shows how these applications, operating systems, and virtual machines have been allocated to the four cores of a multicore processor. Some interesting aspects of this architecture include the following: 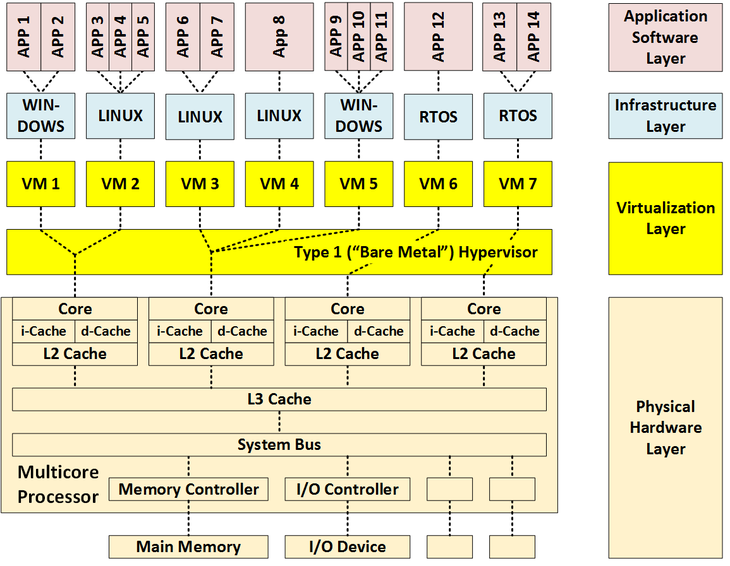 VM Virtualization via a Type 2 Hypervisor 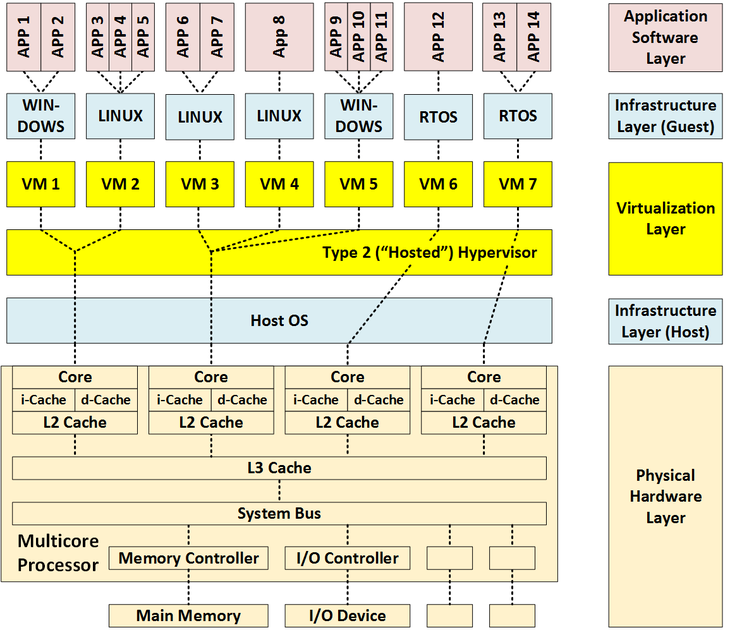 On the other hand, virtualization via VMs has significant limitations with regard to their time/space overhead and the unpredictable nature of the hypervisor's impact on scheduling. As a result, virtualization via VMs may be unsuitable for many types of real-time, safety-critical, and security-critical systems, such as automotive software, Internet of Things (IoT), and software for military combat systems.

Virtualization via VMs is being combined with virtualization via containers (the topic of the next post in this series). Where appropriate, VMs are also being replaced by containers, which are lighter-weight virtual runtime environments that run on top of a single OS kernel without emulating the underlying hardware. Thus, VMs emulate hardware, while containers emulate OSs.

Security is increasingly important as vulnerabilities (VM escapes) in virtual machines and hypervisors are discovered. For example, exploits have been discovered that enable attackers and malware to violate spatial isolation by escaping one VM and infecting another.

Pros of Virtualization via Virtual Machines

The following advantages have led to the widespread use of virtualization via VMs:

Cons of Virtualization via Virtual Machines

Although there are many advantages to moving to virtualization via VMs, architects must address challenges and associated risks in the following six areas: 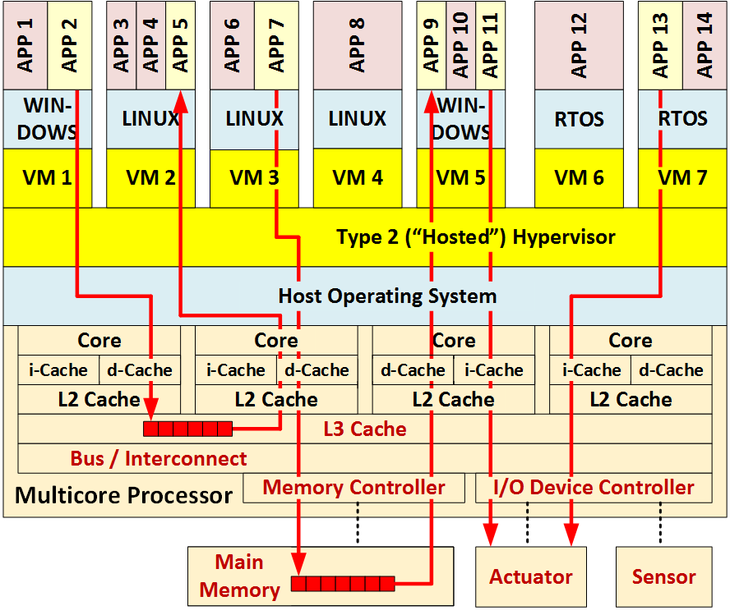 5. Safety. Moving to a virtualized architecture based on VMs and hypervisors probably requires safety recertification. Interference between VMs can cause missed deadlines and excessive jitter, which is a measure of the variation in the amount of time taken to accept and complete a task. In turn, this can cause the existence of hazards due to faults and the occurrence of accidents due to failures. A comprehensive hazard analysis will typically require the use of appropriate real-time scheduling and timing analysis. Based on assumptions obsoleted by the use of virtualization via VMs, safety policies need to be updated based on the following recommendations. Standard architectural approaches for ensuring reliability (such as redundant execution with voting) do not avoid single points of failure when the software is run on multiple VMs rather than multiple physical processors.

6. Security. Moving to a virtualized architecture based on VMs and hypervisors likely requires security recertification. Although the use of virtualization via VMs typically improves security, it is not a guarantee. The hypervisor itself is an additional attack vector increasing the overall attack surface. Security vulnerabilities can violate isolation enabling sophisticated exploits to escape from one VM to another via the hypervisor.

7. Performance. In a virtualized environment, hardware resources, which are de-coupled from software, no longer represent dedicated resources, and response times may lag due to data latency and the processing performed by the virtualization layer. Virtualization via VMs is a source of unpredictability due to jitter, which, in turn, can cause response time failures to meet hard real-time deadlines. The use of VMs also increases cold start and restart times.
On the other hand, optimization schemes (such as PCI[1]-passthrough available under Xen, allowing a hardware resource to run as a native resource for a guest application) are available to reduce potential data latency for high bandwidth, low latency applications.

8. Quality. Because virtualization via VMs is a relatively new technology, hypervisors and VMs often have a higher defect density than mature operating systems. The complexity and added concurrency increases the number of test cases needed for integration and system testing.

9. Cost. Virtualization via VMs increases cost in two ways: (1) by increasing the architecture, testing, and deployment effort and (2) by increasing licensing costs if free-and-open-source software (FOSS) hypervisors and VMs are not used.

Read all posts in the multicore processing and virtualization series.