If adverse events or conditions cause a system to fail to operate appropriately, they can cause all manner of harm to valuable assets. As I outlined in previous posts in this series, system resilience is important because no one wants a brittle system that cannot overcome the inevitable adversities.

This fifth post in the series presents a relatively comprehensive list of resilience techniques, annotated with the resilience function (i.e., resistance, detection, reaction, and recovery) that they perform.

- Provide projections concerning hardware components approaching end-of-life, so that they may be replaced before a fault or failure occurs (Prevention--not resilience)
- Monitor the health of other subsystems and react appropriately to adverse conditions and adverse events (Detection) [Atamuradov et al. 2017]

Redundancy is very important to resilience. It is therefore worth examining the types (and associated subtypes) of redundancy. The following UML class diagram illustrates many of the most commonly used redundancy techniques that support resilience: 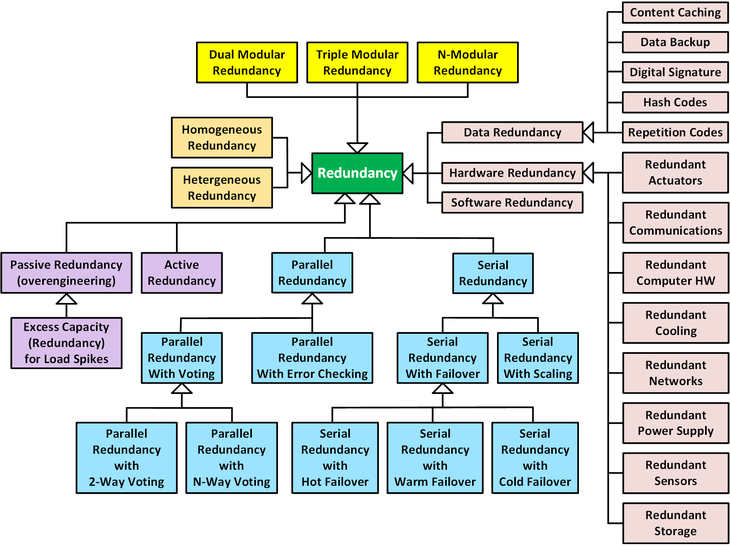 There are clearly many techniques that can be used to implement system resilience requirements. These techniques can be categorized in multiple ways, the two most important of which are by resilience function and by implementation. This abundance of techniques and types of techniques provides system architects and specialty engineers with a great deal of flexibility when it comes to ensuring a sufficient resilience, especially when a multi-layer defense-in-depth approach is used. On the other hand, incorporating resilience techniques increases system complexity and can therefore, paradoxically, make the system less resilient. Selecting the right number, type, and balance of resilience techniques is anything but trivial.

The next post in the series will address the testing and evaluation of a system's resilience.

Read previous posts in this series:

[Marsh 2017] Jennifer Marsh, "DDoS Monitoring: How to Know When You're Under Attack," Solarwinds Loggly, 25 January 2017. [https://www.loggly.com/blog/ddos-monitoring-how-to-know-youre-under-attack/]