Multicore and Virtualization: An Introduction

Multicore processing and virtualization are rapidly becoming ubiquitous in software development. They are widely used in the commercial world, especially in large data centers supporting cloud-based computing, to (1) isolate application software from hardware and operating systems, (2) decrease hardware costs by enabling different applications to share underutilized computers or processors, (3) improve reliability and robustness by limiting fault and failure propagation and support failover and recovery, and (4) enhance scalability and responsiveness through the use of actual and virtual concurrency in architectures, designs, and implementation languages. Combinations of multicore processing and virtualization are also increasingly being used to build mission-critical, cyber-physical systems to achieve these benefits and leverage new technologies, both during initial development and technology refresh.

In this introductory blog post, I lay the foundation for the rest of the series by defining the basic concepts underlying multicore processing and the two main types of virtualization: (1) virtualization by virtual machines and hypervisors and (2) virtualization by containers. I will then briefly compare the three technologies and end by listing some key technical challenges these technologies bring to system and software development.

The following figure shows the architectural differences between multicore processing, virtualization via VM, and virtualization via container, with the relevant technologies highlighted in green. In this figure, SW1 through SW4 represent four different software applications. The standard acronyms OS and VM stand for operating system and virtual machine, respectively. The boxes labeled C1 through C4 on the left represent cores in a multi-core processor, whereas on the right they represent containers. The figure also implies the multi-core processing is primarily a hardware technology, whereas virtualization, whether by virtual machines or containers, is a software technology.

The following figure provides another way of looking at the three technologies: by considering the layer at which the technology exists. Multicore processing provides multiple real hardware platforms. Virtualization by VMs sits on top of multicore processing and provides multiple virtual hardware platforms. Virtualization by containers can sit on top of virtual machines where it can provide multiple virtual operating systems. This figure also shows that: 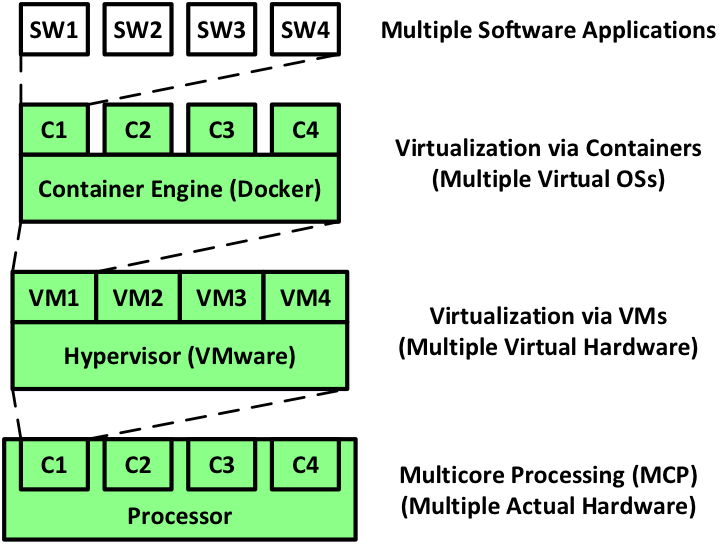 Although these three technologies offer many important benefits, they also have significant (potentially) negative ramifications that system and software architects must address:

The next post in this series will define multicore processing, list its current trends, document its pros and cons, and briefly address its safety and security ramifications. The following two blog entries will do the same for virtualization via virtual machines and virtualization via containers. These postings will be followed by a final blog entry providing general recommendations regarding the use of these technologies on mission-, safety-, and security-critical, cyber-physical systems.