The first blog entry in this series introduced the basic concepts of multicore processing and virtualization, highlighted their benefits, and outlined the challenges these technologies present. This second post will concentrate on multicore processing, where I will define its various types, list its current trends, examine its pros and cons, and briefly address its safety and security ramifications.

The following figure notionally shows the architecture of a system in which 14 software applications are allocated by a single host operating system to the cores in a homogeneous quad-core processor. In this architecture, there are three levels of cache, which are progressively larger but slower: L1 (consisting of an instruction cache and a data cache), L2, and L3. Note that the L1 and L2 caches are local to a single core, whereas L3 is shared among all four cores. 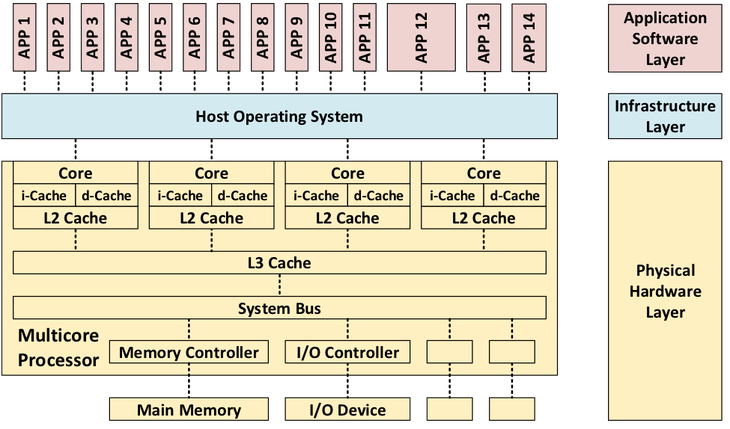 The following figure notionally shows how these 14 applications could be allocated to four different operating systems, which in turn are allocated to four different cores, in a heterogeneous, quad-core processor. From left to right, the cores include a general-purpose central processing unit core running Windows; a graphical processing unit (GPU) core running graphics-intensive applications on Linux; a digital signal processing (DSP) core running a real-time operating system (RTOS); and a high-performance core also running an RTOS. 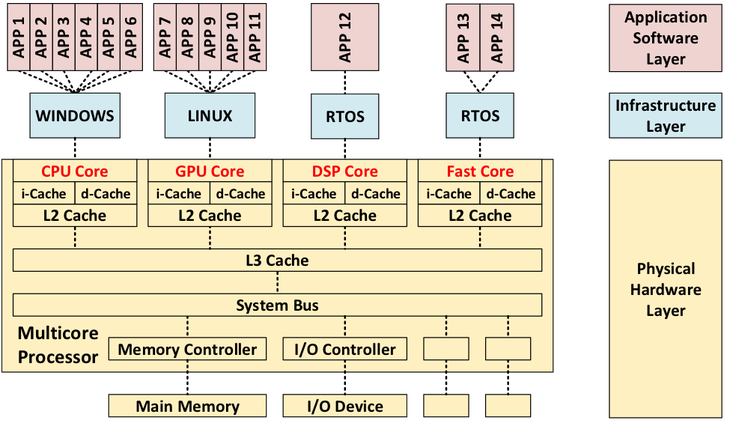 Although multicore processors have largely saturated some application domains (e.g., cloud computing, data warehousing, and on-line shopping), they are just starting to be used in real-time, safety- and security-critical, cyber-physical systems. One area in which multicore processing is becoming popular is in environments constrained by size, weight, and power, and cooling (SWAP-C), in which significantly increased performance is required.

Multicore processing is typically commonplace because it offers advantages in the following seven areas:

Although there are many advantages to moving to multicore processors, architects must address disadvantages and associated risks in the following six areas: 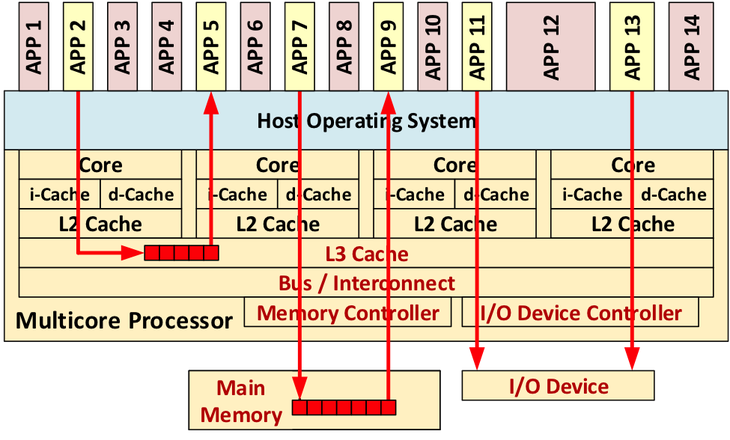 Real-time scheduling on multicore processing platforms is a Department of Defense (DoD) technical area of urgent concern for unmanned aerial vehicles (UAVs) and other systems that demand ever-increasing computational power. SEI researchers have provided a range of techniques and tools that improve scheduling on multicore processors. We developed a mode-change protocol for multicores with several operational modes, such as aircraft taxi, takeoff, flight, and landing modes. The SEI developed the first protocol to allow multicore software to switch modes while meeting all timing requirements, thereby allowing software designers add or remove software functions while ensuring safety.

This SEI is transitioning this research through activities that include the following:

The next two blog entries in this series will define virtualization via virtual machines and containers, list their current trends, and document their pros and cons. These postings will be followed by a final blog entry providing general recommendations regarding the use of these three technologies.