A pervasive belief in the field of software engineering is that some programmers are much, much better than others (the times-10, or x10, programmer), and that the skills, abilities, and talents of these programmers exert an outsized influence on that organization's success or failure. This topic is the subject of my recent column in IEEE Software, The End to the Myth of Individual Programmer Productivity.

In the field of baseball research (sabermetrics), researchers who challenged widely held—but erroneous—notions were able to exploit market inefficiencies to their advantage, a development vividly described in Moneyball by Michael Lewis. Similarly, astute software managers can benefit by challenging commonly accepted wisdom. In this blog post, I examine the veracity and relevance of the widely held notion of the x10 programmer. Using data from a study we conducted at the SEI, I found evidence that challenges the idea that some programmers are inherently far more skilled or productive than others.

Our study concluded that the truth is more nuanced. First, I found that most of the differences resulted from a few very low performances, rather than exceptional high performance. Second, there are very few programmers at the extremes. Third, the same programmers were seldom best or worst. While average performance differs between programmers, only half the variation in program-development effort can be attributed to inherent programmer skill; the other half is within the individual developer's day-to-day variation. That is, the programmers differ from themselves as much as they differ from other members of the group. The many studies that seem to show a x10 performance range conflate differences between programmers with normal programmer day-to-day variation.

This finding is important, since it means that

Belief in the salience and criticality of individual programmer skill within software engineering has a long history, beginning with studies in 1968 by Sackman et al. and later summarized by McConnell (chapter 30), Glass, and others. Estimates of top performers vs. average performers in these studies ranged from 10:1 to 28:1. For teams, Boehm et al. used a factor of almost 4:1, and DeMarco and Lister claimed that organizations varied in their performance almost as much as individuals do.

These influential published assertions have contributed to widely held assumptions about the importance of individual programmer skill. Yet while Curtis's small study of defect fix times (pp. 279-294) suggested a high variation for the same developer on multiple tasks, to the best of our knowledge, none of these original studies separated the variations between developers from the productivity variations of individual programmers from program to program.

To better understand the causes of software development productivity, we performed our own study. We used data collected from our own work teaching the Personal Software Process (PSP). PSP teaches software developers how to measure their own performance and implement a personal Demming-styled plan-do-check-act improvement cycle. A foundational teaching of the PSP is that improvement starts with consistency. During the PSP class, we compiled and showed class data to the students every day; thus the instructors observed firsthand how individual performances varied from one program to another.

For the study, we used data from the PSP class programming assignments for which students record effort, size, and defects for a series of programs. The students used their preferred programming languages and environments. To simulate a development cycle for their data collection, we had the students read and understand the assigned problem, implement a solution, and then test the solution against a set of predetermined test cases.

The program assignments implemented the data analysis the students performed, including line counting and implementation of statistical calculations. Although the work was mostly mathematical, no special knowledge was assumed, and the instructions provided sufficient detail and examples for a non-specialist to implement the solutions.

In addition to meeting the requirements statement, each solution involved simple input, output, modularization, and the use of control and loop logic. Each was the size of one or two small Agile user stories requiring two or more hours to implement. The student recorded time on the major activities needed to complete a solution that passed all required tests, including planning, design, coding, testing, and personal reviews.

This study used the 10-exercise version of the course, for which each student programmed solutions to the same 10-assignment specifications and collected the direct effort time. Of the 3,800 students in our classes (from 2000 to 2006), this study included only the 494 who used the C programming language and who also completed all 10 programming exercises. Most students were professionals from industry with experience ranging from less than a year (half of the subjects) to 36 years, with an average of 3.7 years.

In this study, productivity was measured as the relative effort compared to the group average for the same program or programs. Relative productivity was expressed both on a ratio scale and in nonparametric-ordered performance rank. Without an objective size (e.g., function points) to compare programs directly, this relative measure is not an absolute measure of productivity across programs; but since our research questions were between and within students, not program assignments, this seemed the most direct measure. 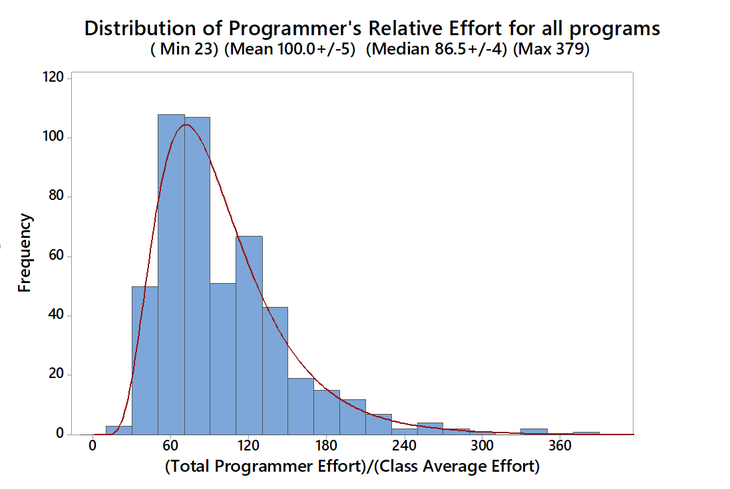 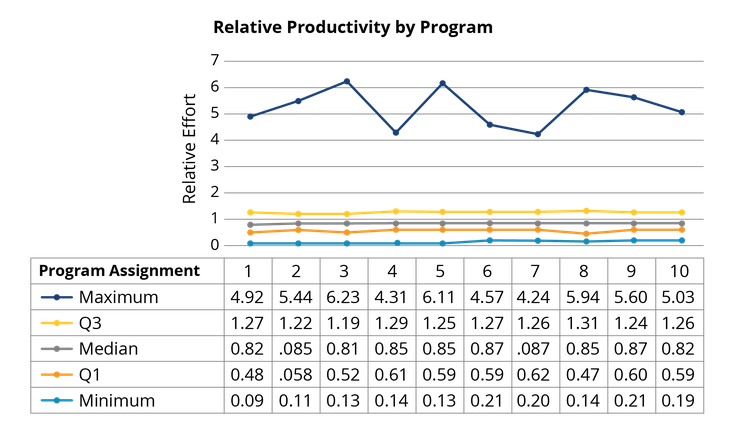 Figure 1 shows how the total course effort of each programmer compared to his or her peers. The range of 23 to 393 suggests a large gap in performance. But there are very few extremes. Half are clustered to within a factor of 2. When looking at individual programming assignments, however, the lowest performing extreme is exaggerated.

Figure 2 separates the productivity by quartile boundaries for each of the 10 program assignments. We drew two conclusions from this chart:

That consistency in the quartile trends hides a more interesting observation about individual programmer consistency. The total body of work has much less spread than the individual efforts. It turns out that programmer's individual performance ranking varies quite a bit, as shown in Figure 3. 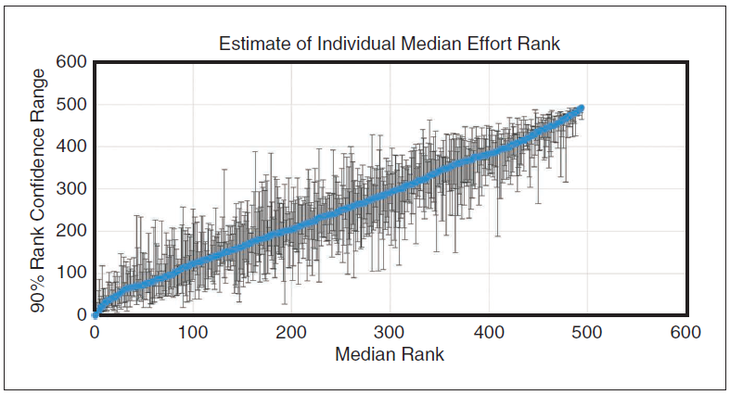 Figure 3 explores the variations of each student across programming assignments. To generate these data, within each assignment all students were ranked 1 to 494 based on how quickly they finished that assignment. For each student, those ranks are summarized as

The plot shows the statistical uncertainty of a student's performance ranking, not their range of rankings. The average range for students' assignment rank was much wider, 249. This finding means that an average programmer typically finished everywhere between top to the bottom quartile while a top programmer or bottom programmer was sometimes average. A parametric estimate of variation produced similar results. About half the overall variation in assignment performance was within individual programmer rather than between the programmers.

To emphasize the last point, the distribution of relative effort (summarized in Table 1) shows that 90 percent of students fall within a modest performance range. The average coefficient of variation for individual students (42 percent) is not much smaller than the overall variation. In fact, of the 494 students, 482 had at least one program assignment finished in less than the average time, and 415 had at least one program assignment finished in more than the average time. In summary, these statistics show that program-assignment completion time is driven as much by seemingly random and unknown factors as by true programmer-productivity differences.

These wide performance ranges suggest that even experienced programmers vary widely in performance from one task to the next. Our study suggests that hiring "the best programmers" will not be as effective or simple as we might think.

The idea that top performers can easily be identified and can then be expected to improve productivity may represent a hasty conclusion based on small and insufficient data samples. It takes a substantial body of work to evaluate a programmer's true performance. We had 10 samples each in our study, with identical requirements, under controlled conditions, with no distractions, and it was barely enough data to draw meaningful conclusions. The real world, of course, is far more complex than the limited, controlled study that we conducted.

More importantly, managers do still have a number of other tools available to improve productivity. These can be grouped into workflow planning, environment, technology, and training. I will elaborate on some of these in future blog posts. For example,

In summary, while some programmers are better or faster than others, the scale and usefulness of this difference has been greatly exaggerated. Experience alone clearly is important, but its value is limited. Rather than try to label programmers with simplistic terms such as "best" and "worst," the most motivating and humane way to improve average performance is to find ways to improve everyone's performance.

Programmers and managers interested in learning how to incrementally collect data and use that information to improve performance can review Team Software Process and Personal Software Process materials.

For a more detailed treatment of the study described in this post, read the article in IEEE Software from which this blog post was derived, The End to the Myth of Individual Programmer Productivity.

Review the student assignment data on which the study described in this post was based.

Follow the CUI: 4 Steps to Starting Your CMMC Assessment