The increasingly rapid system and software evolution that characterizes modern software practices has motivated the growth and widespread adoption of a DevSecOps approach to secure system development. DevSecOps and Agile practices shorten the time needed to develop, deliver, deploy, and sustain working resilient systems. Another rising tide in systems and software engineering has been model-based systems engineering (MBSE), a formalized methodology that is used to support the requirements, design, analysis, verification, and validation associated with the development of complex systems. A digital-engineering environment that applies MBSE creates a common standards-based approach to documenting a system that enforces the use of the standard by all stakeholders, resulting in an overall reduction of development risks.

In this blog post, we introduce ModDevOps as an extension of DevSecOps that embraces MBSE technology. By making the integration between DevSecOps and MBSE explicit, ModDevOps enables developers to benefit from both the speed of DevSecOps and the risk reduction of MBSE.

About Model-Based Systems and Software Engineering

In MBSE, systems are defined as a collection of models and source-code artifacts. Their combination covers all steps of the engineering cycle, from high-level requirements to the delivery of the source code.

Figure 1 provides an overview of the interplay between abstract activities and the corresponding supporting notation. It covers the languages used: 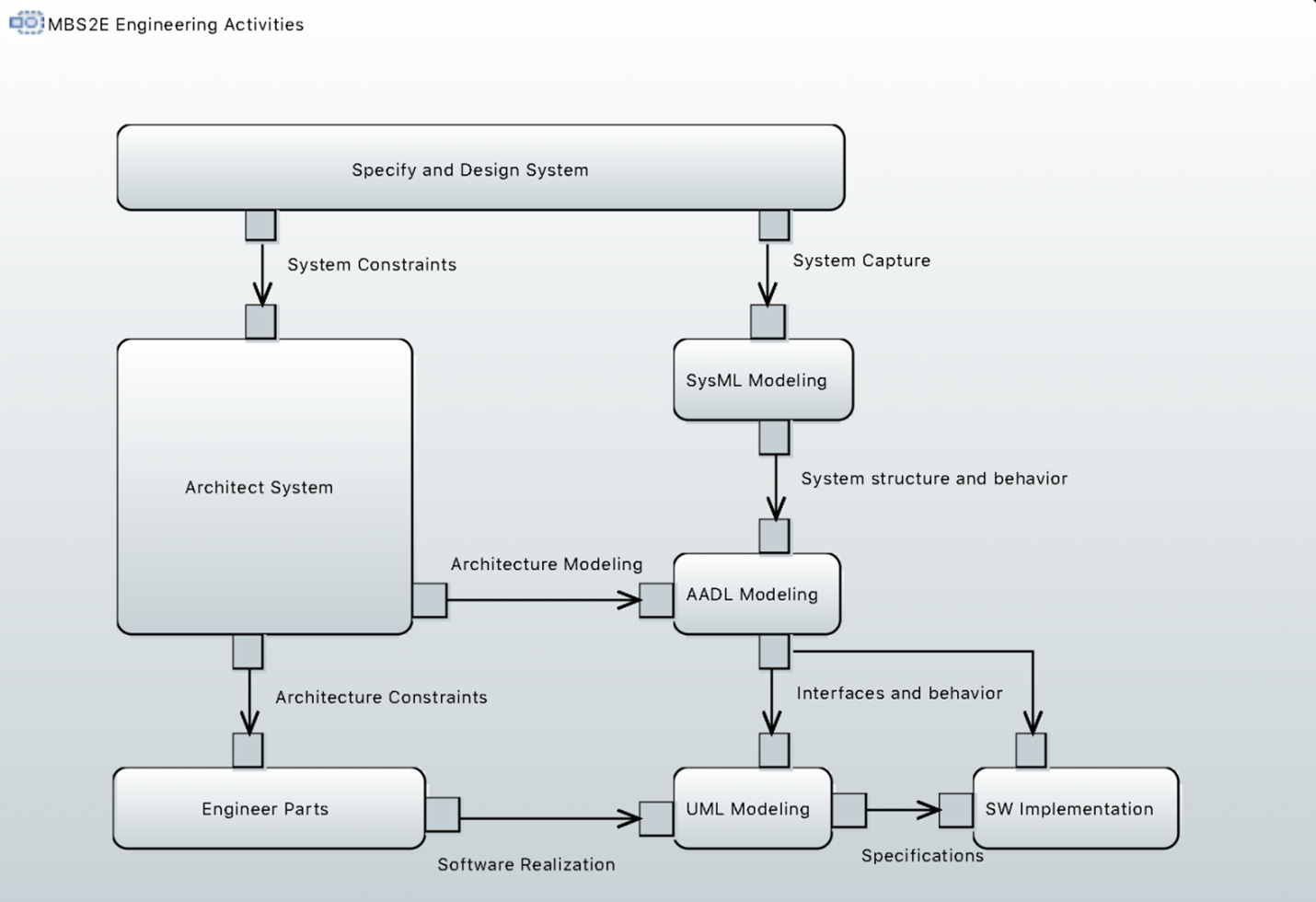 The SysML activity-diagram formalism is used to capture the MBSE engineering activities depicted above.

However, Figure 1 depicts only the causal dependencies among steps in the process, i.e., its dataflow. In addition, it is necessary to move several decision points across steps, such as moving validation milestones forward or rework activities backward. Each project will thus have dedicated control-flow strategies to decide which steps to execute.

Each modeling technology provides automated processes to perform model analysis or code synthesis. Here is the role of each formalism:

These processes can be embedded into larger systems engineering processes or through proper inclusion in a software production environment.

Model design and analysis capabilities ultimately contribute to the engineering of a system across its entire lifecycle. Hence, a model can also be used to produce software in various ways, including code generation, simulation-based verification and validation (V&V), and implementing digital twins.

These approaches require a common process to ease model exchange and model transformation, and to leverage automation whenever possible.

So far, we have introduced various considerations on models and how they can be interconnected. We will now define ModDevOps, which extends DevSecOps to incorporate models.

One desirable feature of models, beyond their advanced analysis capabilities, is the ability to deliver secure systems faster, which is the true realization of DevSecOps. DevSecOps has been codified as a set of principles and practices that enable better communication and collaboration among relevant stakeholders including developer (Dev), security (Sec), and operations (Ops), as well as other teams for the purpose of specifying, developing, continuously improving, and operating software and systems products and services. It aims to shorten the systems-development lifecycle and provide continuous deployment with high software quality. DevSecOps relies on the idea of continuous integration, delivery/deployment, monitoring and infrastructure as code as central pillars of its methodology.

The U.S. Air Force proposed a definition of DevOps that comprises the entire system lifecycle:

DevOps is a software engineering culture and practice that aims at unifying software development (Dev) and software operation (Ops). The main characteristic of the DevOps movement is to strongly advocate automation and monitoring at all steps of software construction, from integration, testing, releasing to deployment and infrastructure management.

We extend this definition to ModDevOps and define ModDevOps as follows, with changes we have made to the Air Force DevOps definition highlighted in bold:

ModDevOps is a systems/software co-engineering culture and practice that aims at unifying systems engineering (Mod), software development (Dev), and software operation (Ops). The main characteristic of ModDevOps is to strongly advocate abstraction, automation, and monitoring at all steps of system construction, from integration, testing, releasing to deployment and infrastructure management.

Modeling encompasses modeling and source-code definition. Source code is the ultimate machine-processable model of the function to be implemented. This step encompasses the following activities of ModDevOps:

Test bench/system realization is an automated software factory that builds the various artifacts of simulation code and executables.

As defined, ModDevOps extends DevOps with MBSE. These steps appear mostly during the Dev phase, aggregating engineering artifacts. The Ops phase entails collection of data to inform subsequent updates of the system. These can affect all elements of the process, from high-level systems artifacts down to software elements. The quality of the data collected and its analysis are critical.

Model-based techniques have demonstrated their added value in defining proper abstractions to conduct early analysis and virtual system integration. Modeling encompasses activities well beyond software development. It touches all engineering domains, including systems engineering, mechanical engineering, electrical engineering, etc. The larger view of a DevSecOps-like process that we have presented in this blog post embraces modeling activities as an integral part of the engineering of software-intensive systems.

ModDevOps extends DevSecOps by recognizing the role of modeling activities in the engineering of systems, especially cyber-physical systems. The formalization of ModDevOps using SysML allows us to better characterize the various steps of the process. As defined, ModDevOps remains a generic process that can be tailored. For more information about ModDevOps and how you can apply these practices in your organization, please contact us at info@sei.cmu.edu.

Read the SEI blog post, An Introduction to DevOps.

Read about SEI work in DevSecOps.

Read about SEI work in AADL.

Send a Message to Jerome Hugues

Will continuous integration improve the security of my application?