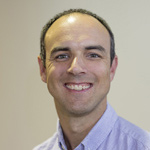 Continuous delivery practices, popularized in Jez Humble's 2010 book Continuous Delivery, enable rapid and reliable software system deployment by emphasizing the need for automated testing and building, as well as closer cooperation between developers and delivery teams. As part of the Carnegie Mellon University Software Engineering Institute's (SEI) focus on Agile software development, we have been researching ways to incorporate quality attributes into the short iterations common to Agile development.

We know from existing SEI work on Attribute-Driven Design, Quality Attribute Workshops, and the Architecture Tradeoff Analysis Method that a focus on quality attributes prevents costly rework. Such a long-term perspective, however, can be hard to maintain in a high-tempo, Agile delivery model, which is why the SEI continues to recommend an architecture-centric engineering approach, regardless of the software methodology chosen. As part of our work in value-driven incremental delivery, we conducted exploratory interviews with teams in these high-tempo environments to characterize how they managed architectural quality attribute requirements (QARs). These requirements--such as performance, security, and availability--have a profound impact on system architecture and design, yet are often hard to divide, or slice, into the iteration-sized user stories common to iterative and incremental development. This difficulty typically exists because some attributes, such as performance, touch multiple parts of the system. This blog post summarizes the results of our research on slicing (refining) performance in two production software systems. We also examined the ratcheting(periodic increase of a specific response measure) of scenario components to allocate QAR work.

Slicing and Allocation in Agile Projects

QARs are often provided in unstructured and unclear ways. QAR refinement is the process of elaborating and decomposing a QAR into a specifiable, unambiguous form achievable in one release and finding suitable design fragments. This process, also known as slicing or sizing, is typically applied to user stories, short, textual requirements popularized by agile methodologies. The requirements community calls such iterative refinement the Twin Peaks model because you iteratively cross between the 'peaks' of requirements (the problem domain) and architecture (the solution domain).

QAR refinement should produce a unit of work small enough to test, small enough to fit in an iteration, and useful enough to produce value. It should separate abstract requirements into constituent parts so they and their interrelationship can be studied. "[QAR refinement] is a design activity," a software developer recently posted on Twitter. "It surfaces our ignorance of the problem domain."

There are a number of ways to size requirements. Some methods are based purely in the problem space, some are based on the work involved in satisfying the requirement, and some are a mixture of analyzing the problem and possible solutions. These approaches include

In the two examples described below, we found the most common slicing approach was ratcheting, popularized by Martin Fowler in his blog post "Threshold Testing."

Our research question was

How do projects slice quality attribute requirements into iteration-sized pieces, and how are these pieces allocated to a project plan or sprint backlog?

QARs, including performance, security, and modifiability, significantly influence architecture. We conducted case studies of production systems (we omit identifying details to protect confidentiality). For each case, we conducted interviews with team leads and architects to understand the teams' deployability goals and architectural decisions they made to enable deployability. We then performed semi-structured coding to elicit common aspects across the cases.

Based on our analysis, we described the quality attribute work as a series of increments, representing the current state of the QAR, as the requirement is progressively refined and enhanced. Table 1 below shows our conceptual framework. We used a scenario to define each state, with each scenario consisting of a stimulus, some context or background, and a response to that stimulus. Our approach is analogous to an Agile, "Behavior-Driven Development" (BDD)-style "Given <>, When <>, Then <>" model. The value column reports the outcome of that increment. Based on our interviews, refinement happens not only in the stimulus response, but also the context and the stimulus itself. In other words, one can tighten the response (from 10 to 1 ms, for example); one can loosen the context (for all customers instead of just certain customers); or one can expand the range of stimuli (any order versus special order types). We believe refinement of QARs using scenarios creates a reasonably sized chunk of work for analysis, implementation, and possibly even testing during an iteration.

Project A developed financial support software for a mid-size firm. The software supported the buying and selling of financial securities. Performance was a key concern, particularly at the close of the financial day. Customers may have to pay interest if they have to borrow large sums of money to hold sell orders overnight if they were not processed by the close of trading. Development cycles were deliver-on-demand, rather than fixed iterations, while customers provided feedback to the developers that informed the work in the subsequent state. Table 1 shows a summary of the state transitions. Below, we describe states that we identified in the first project: 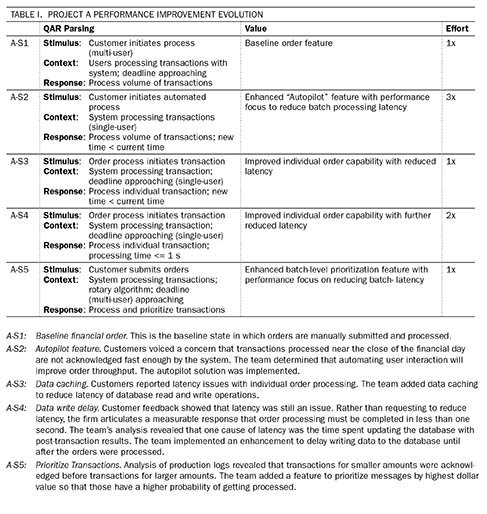 This analysis demonstrates that each refinement we captured reflects a change in the evolving requirements context, such as increasing number of orders to be processed or reducing performance threshold for a single order. The team also must make tradeoffs in the measurement criteria, for example, first optimizing for throughput (A-S2) before dealing with latency (A-S3, A-S5). With three dimensions to adjust (stimulus, context, response), ratcheting in one dimension may require easing up on another to make progress.

Project A explained that separating performance-related from feature-related requirements in the backlog or when planning and allocating work to iterations was not useful. Project A followed evolutionary incremental development by doing performance-related analysis work concurrently and loosely coupled from implementation sprint work. Separating feature work from performance work is a common pattern that we observe in industry. As analysis work was completed, the work was allocated to sprints. Well-understood changes refining existing features, such as A-S1 through A-S3, were allocated to implementation sprints with minimal analysis. However, in cases where significant analysis was needed (e.g., A-S4), the team created an exploratory prototype to learn more about the problem and investigate alternative solutions while continuing to mature the system and implement ongoing requirements. For A-S4 the changes were more substantial, so the work was allocated to multiple sprints.

Project B, described in Table II, was also a financial system with stringent performance requirements. The system functionality included high-speed, stock order processing. Like Project A, the performance iterations are described as state transitions. This project was in the pre-release phase, focusing on evaluating the design to ensure it could meet requirements. The team used a scenario-driven approach to investigate performance risks. Output of scenario analysis is input to the evolving system design and architecture of the next state, as described below. 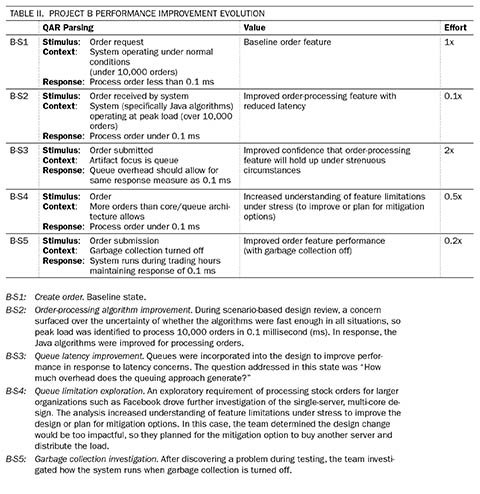 The analysis of this example also shows changes to the stimulus, context, and response, as summarized below.

Project B did not separate feature-related and performance-related requirements in their software development lifecycle either. Like Project A, the team conducted exploratory performance analysis and design work concurrently with maturing other features and continuing implementation. Work was integrated into implementation sprints as it became better defined through analysis of design artifacts, prototyping, or both.

Ultimately, the purpose of refining QARs is to decompose a stakeholder need or business goal into iteration-sized pieces. The process of allocation then takes those pieces and determines when to work on them. This activity involves both analysis and design: refinement and allocation are explorations of the problem and solution spaces, and evolutionary, iterative development allows for course changes when new information is acquired. Developers work toward satisfying cross-cutting concerns in the context of the effort and ultimate value.

We see evidence of projects that are better able to sustain their development cadence with a combination of refinement and allocation techniques guided by measures for requirement satisfaction, value, and development effort. As we retrospectively analyzed these examples, we found that these teams did not follow a formal technique; however, they did have common elements in how they refined the work into smaller chunks, enabling incremental requirements analysis and allocation of work into implementation increments.

Martin Fowler describes ratcheting as a performance requirement in terms of increasing a specific response measure. Based on what we learned from our interviews, we suggest that this ratcheting concept can be broadened. For example, changes in the evolving context, such as increasing the number of orders to be processed or reducing the performance threshold for a single order, allow for breaking a cross-cutting concern to a reasonably sized chunk of work for analysis, allocation, or testing. We suggest that these examples, which demonstrate ratcheting in multiple dimensions, could be useful for teams struggling with how to break up and evolve cross-cutting concerns during iterative and incremental development.

This blog post is a summarization of a paper that was presented at the International Conference on Software Maintenance and Evolution.

Send a Message to Neil Ernst

A Field Study of Technical Debt