Identifying, estimating, and containing the cost of software is critical to the effective deployment of government systems. Cost estimation has been cited by the Government Accountability Office (GAO) as one of the primary reasons for DoD programs' cost overruns. Planners typically estimate costs via modeling and simulation tools, such as the Constructive Cost Model (COCOMO II). While COCOMO II is primarily used to estimate development costs, the costs of operating, maintaining, and sustaining software-intensive systems are often harder to estimate and predict than development costs--and more significant. It is often these operation and maintenance (O&M) costs that are most responsible for problematic cost overruns. This post describes SEI efforts to control cost overruns and reduce costs over the system's active lifetime by including open systems architecture considerations in the O&M costs early in the software-development lifecycle.

One way to predict software costs earlier in the lifecycle is to focus on software architecture. The architecture of a software system largely determines the ease and complexity of ongoing O&M. As time passes, functionality and maintenance requirements change, new components are added to the system, and the system adapts to new missions for which it may not initially have been intended. An examination of the software architecture of the system provides insights into the cost of maintaining long-lived systems over time.

It is clear from this description how the openness of the software architecture in a software-reliant system can reduce O&M costs. Our goal at the SEI is to provide objective criteria for measuring the openness of a software architecture and use that information to estimate software development and maintenance costs more accurately. It's our experience that objective measures of openness will help managers, program executive offices, reviewers, and tiger teams predict and reduce O&M costs in long-lived software-reliant systems. To this end, the SEI has developed the toolset depicted in Figure 1 that provides 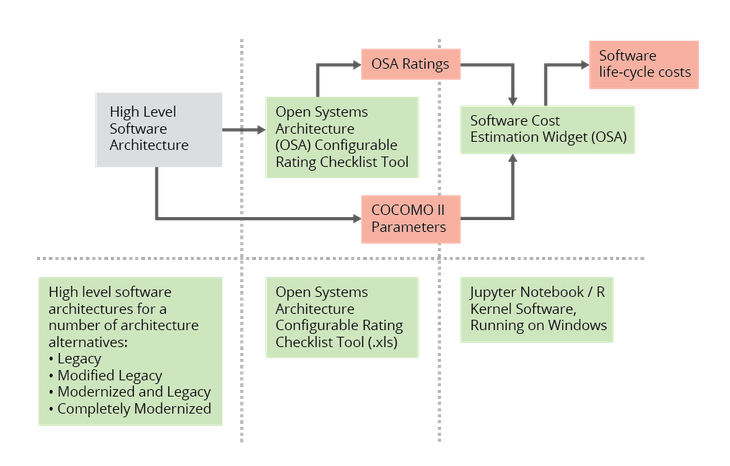 How to Assess the Openness of an Architecture

We apply this methodology to the software architecture for each unit of assessment (UoA) in a software-reliant system. For example, a DoD combat aircraft can be decomposed into separate UoAs: radar system UoA, weapons system UoA, displays and control UoA, mission planning UoA, each of which we assess individually. Within a UoA, we measure the openness of the software components (based on the key attributes above) of the high-level software architecture that compose the UoA and feed that data into an updated COCOMO II model.

Our methodology follows the COCOMO II model by predicting costs on a component-by-component basis, applying basic checklists for modularity, interface standards, layering, and open/accessible standards. Although the SEI provides guidance when working with programs, these attributes can be weighted according to which fields a program office deems important in the context of its program. Program managers can also add other attributes.

Cost Estimation Based on System Openness

As shown in Figure 1, the SEI cost-estimation toolset takes as input the results of a software openness checklist and converts it into an estimate of software development and maintenance costs. This output includes a modified version of a configurable open systems architecture checklist tool and an implementation of the COCOMO II estimation equations. The parameters of the cost model are adjusted by the quantified ratings of openness that are computed by the checklist tool.

As demonstrated in the example below, the SEI cost-estimation toolset can produce graphical representations of how estimated costs change over time. Our goal is to produce evidence that including software architecture in a system's early tradeoff decisions can yield a better system architecture that has less risk and less cost (due to avoided rework) over the system's lifecycle.

Our toolset enables us to compare software cost per year for two alternative trajectories in typical DoD acquisition programs:

To show the potential utility of our toolset, we use a hypothetical DoD acquisition program as an example, comparing two potential architecture trajectories described above. By applying the SEI cost-estimation toolset we can show that the second trajectory will ultimately yield significant cost savings based on the architecture-evaluation criteria that produce the ratings. 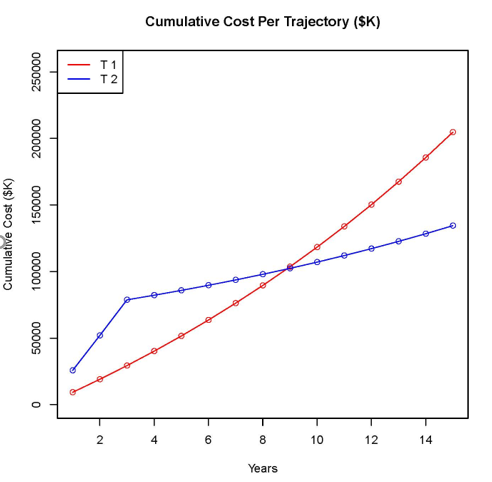 In Figure 2, Trajectory 1 is represented by the red line that goes up--the original software architecture that is maintained for 15 years. The blue line, Trajectory 2, shows three years of increased costs that represent maintaining the old software while simultaneously developing new software based on open architecture. At Year Three, maintenance costs flatten. When we switch over to the new, better architected system in Year Three, the graph shows that the program would begin recovering its rearchitecting investment in Year Nine. By the end of the time period shown in Figure 2, therefore, the program would save $75 million.

Ultimately, our work on the SEI cost-estimation toolset aims to equip acquisition program staff with as much insight as possible into the implications on the software-development effort of early system and software architecture decisions. Acquisition programs are sometimes unaware that early program decisions have specific software architectural implications. Our cost-estimation toolset clarifies these early decisions and quantifies them to the point where their downstream effects on system lifecycle costs can be demonstrated conclusively.

The work described in this blog post has the potential to remove uncertainty about cost as a barrier to adopting open systems architecture methods, platforms, and tools. Our toolset can be used to evaluate candidate architectures for systems before they are developed in terms of anticipated development and O&M costs. We invite programs that would like to learn more about this work to contact us.

Send a Message to Michael Konrad

Send a Message to Michael Konrad