Who Needs to Exploit Vulnerabilities When You Have Macros?

Why is everything old new again? Reliability of the exploit is one reason, but the user interface of Microsoft Office is also to blame.

Attackers like to target weaknesses in the design of an application whenever possible. Using implementation bugs, such as ones that can be found through fuzzing, can be viable for an attacker. Successful and reliable exploitation can rely on a number of variables, such as

In some cases, an exploit for a vulnerability may only work on very specific targets. Attackers look for the widest range of compatibility for their exploits.

Design weaknesses are a much more valuable target for an attacker, as opposed to an implementation flaw that relies on memory corruption, for example. The benefit of such weaknesses is that they can work universally. For example, consider the Microsoft Windows design flaw that caused Windows to automatically execute code that is specified in shortcut files. This weakness was used by the Stuxnet worm.

Malicious Microsoft Office documents that leverage macros are exploiting capabilities that are provided by Microsoft Office by design. Microsoft Office macros can help automate repetitive tasks, but in the end they are equivalent to running native code. As a proof of concept, I made a simple Word document that launches calc.exe by way of a one-line VBScript macro. The screenshot below is from Office 2013 running on Windows 7.

Word does give me a warning about the document having a macro, but how well does the program convey the potential dangers of enabling the macro?

A Trip Down Memory Lane

Microsoft Office for has provided some level of warning to the user, and has required some steps to enable macros before they are executed. However, both of these aspects of enabling macros have changed over the versions of Office for Windows.

Microsoft Office 97 was pretty clear that enabling macros can harm your computer:

The options to proceed include 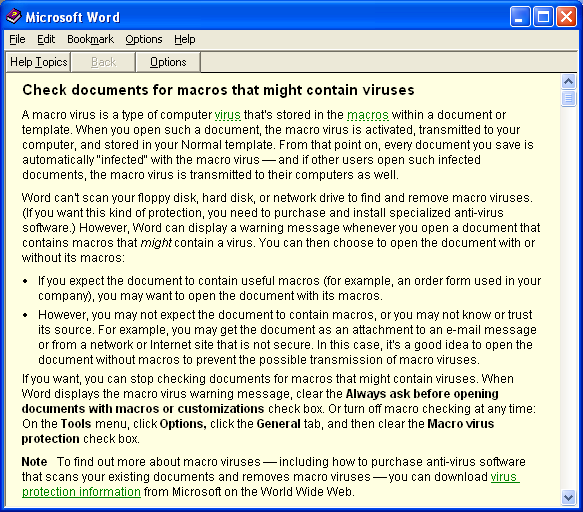 Even with these warnings, the Melissa macro virus still spread in 1999.

Starting with Office 2000, the dialog was a little less informative. However, the possible actions to take are safer for the user: 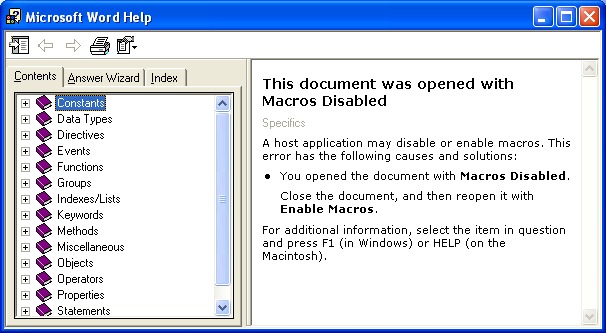 Office XP has similar dialogs, functionality, and help as Office 2000.

Office XP has similar dialogs, functionality, and help as Office 2000 and Office XP.

Office 2007 appears to be the first version of Office where the traditional dialogs have been abandoned. Presumably this was done to avoid the "dialog fatigue" problem that could lead users to give in and make a poor decision.

Here, the warning bar isn't very clear about the potential consequences of macros. But there is only one option to proceed: 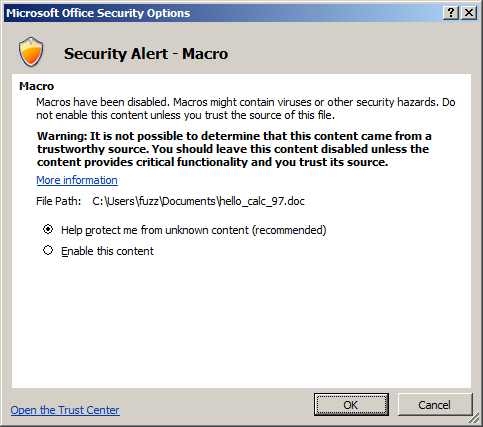 From this dialog, there are several options: 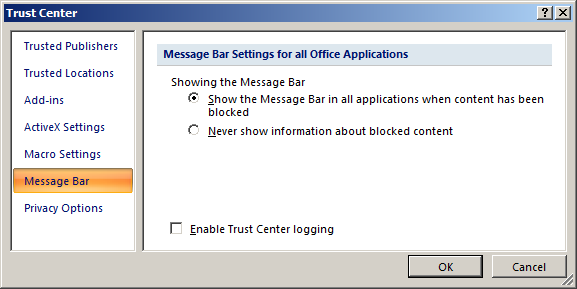 The Office 2007 options seem reasonable. The default is to block macros, but the user is given the option of enabling them on the same screen that clearly indicates the risk.

Presumably with the goal of simplifying the options presented to the user, Office 2010 changed the Message Bar functionality: 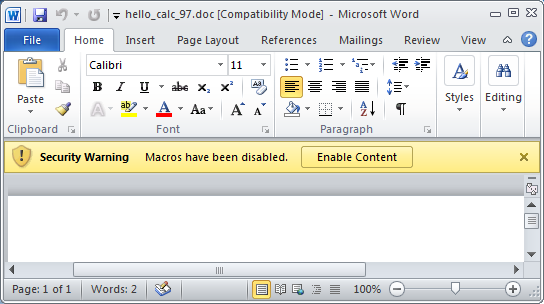 Here the user seems to be given one option:

From a security perspective, this approach is a step backwards. The user is not given any information about the consequences of enabling macros, and the user is given only one obvious option: enable macros. This is dangerous. Attackers are using several social engineering techniques to convince users to click the "Enable Content" button as well.

The Office 2013 experience appears identical to that of Office 2010:

It does not appear to be possible to permanently disable macros in the Mac versions of Microsoft Office. The Disable Macros button in the above dialog is only valid for the current document in the current session. While there is a Macro Security option in the preferences: 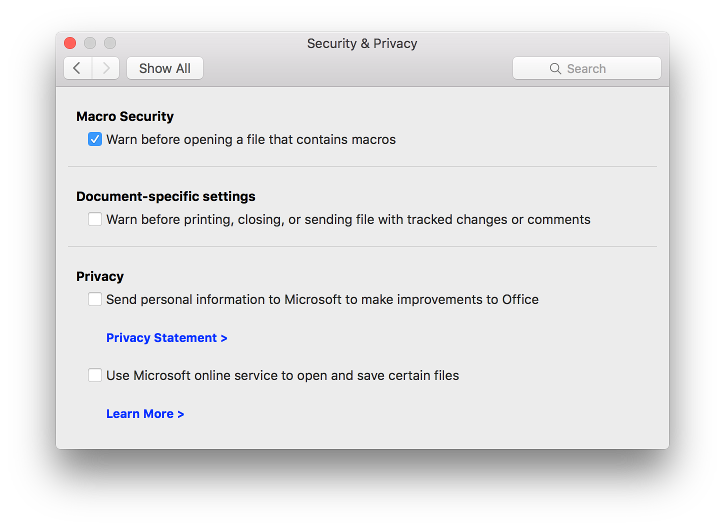 The only setting is Warn before opening a file that contains macros. There is no option to disable macros. Unchecking this box will leave macros enabled, but there will be no warning before they are executed. Do not uncheck this box, as that change would put Office in a very dangerous configuration!

Unfortunately, the default Microsoft Office settings for macros are not secure. Users of newer versions of Office (2010 or 2013) are even more likely to enable macros without understanding the consequences of doing so. Luckily, Microsoft has provided guidance for how to restrict macro functionality. These changes can be rolled out via Group Policy, which should aid in enterprises being able to configure Office in a secure manner.

Option 2 above is the less-secure default option for Microsoft Office. Option 4 above is the most secure, as it will eliminate the chance of a user inadvertently executing a malicious macro.

Some enterprises may have legitimate uses for Office macros, however. In such situations, questions that must be answered include

The first question is important from an attack surface perspective. For example, let's say that my 10,000-person organization has 10 people in finance that need macro capabilities, but the other 9,990 people do not. It makes no sense to give everybody the ability to execute macros.

The second question also helps protect the systems that need some sort of Office macro capabilities. In the example above, let's say that the 10 people in finance only use macros in an Excel spreadsheet that they use. In this case, macros should be disabled without notification for all Microsoft Office components except Excel (e.g., Word, PowerPoint, Project). And for Excel itself, the more-secure setting would be "Disable all macros except those digitally signed." This way, the organization can sign the approved macros. When Excel opens a malicious file with an unsigned macro, the macros will be silently blocked.

As it turns out, Office 2010, 2013, and Office 2016 can show the user details about what enabling macros can do. In the following example 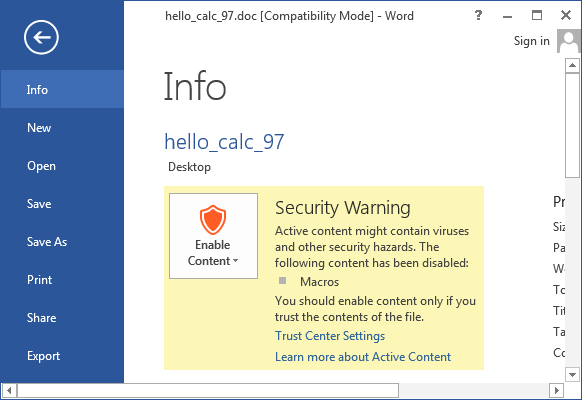 This information is hidden far enough away from the "Enable Content" button that I suspect not many people would even see it.

Macro viruses are back. See

If you wish to protect your systems, restrict access to macros. Regardless of the level of information provided to an end-user, don't always rely on that user to make the right choice.

Disable Microsoft Office macros for as much of your organization as is practical. If you are using Office 2016 or Office 365, the simplest option is to enable the feature that blocks macros in documents that originate from the internet.

For all other Office versions, it is important to disable macros without notification for all Microsoft Office applications by default for all systems. For systems that do need macro capabilities: