Recently, I gave a presentation at BSidesPGH 2019 called Death By Thumb Drive: File System Fuzzing with CERT BFF. (The slides from my presentation are available in the SEI Digital Library.) Although my primary goal was to find bugs in kernel file-system-parsing code, a notable part of my research was investigating attack vectors. In particular, I focused on VHD and VHDX files on Windows systems. In this post, I describe some of the risks associated with these two file types.

The VHD (Virtual Hard Disk) file format, originally introduced with Connectix Virtual PC, can store the contents of a hard disk drive. Eventually, Microsoft Hyper-V adopted this disk image format. Windows 7 and newer systems include the ability to manually mount VHD files. Starting with Windows 8, a user can mount a VHD by simply double-clicking on the file. Once mounted, a VHD disk image appears to Windows as a normal hard disk that's physically connected to the system. VHDX (Virtual Hard Disk v2) images are functionally equivalent to VHD images, but they include more modern features, such as support for larger sizes and disk resizing.

After fuzzing file system images with BFF, I was able to find several different ways to crash Windows as the result of it mounting a corrupted disk. Physically plugging in a USB mass storage device with a corrupted file system was the obvious attack vector. However, many security concepts are negated when physical access to a system is granted. VHD and VHDX files eliminate the requirement for physical access to a victim system. If a user simply double-clicks on a VHD or VHDX file that contains a specially crafted file system, they risk crashing Windows or worse, as illustrated below. 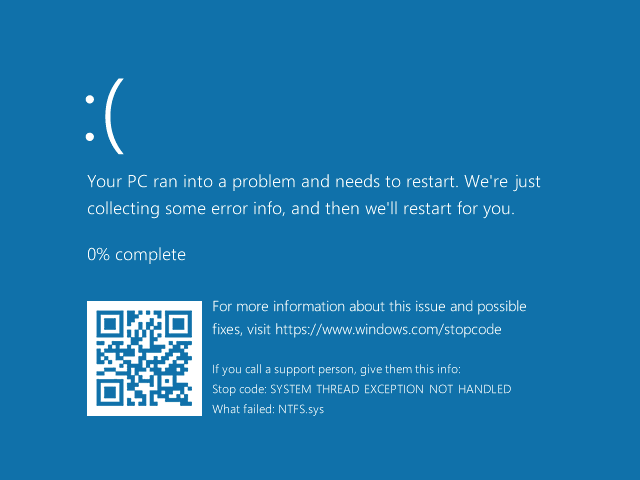 Mark of the Web

Mark of the Web (MOTW) was introduced in Windows XP SP2 and allowed Windows to tag files on the local file system with information about the Internet Explorer security zone from which the files originated. This MOTW feature has evolved to handle more and more file types and scenarios. The recurring theme is that files that came from the Internet (e.g., a web page or an email) may be dangerous, and therefore should be treated with more caution.

Starting with Windows 10, Windows Defender SmartScreen restricts the execution of certain file types if they originated from the Internet. Here's what a user might see when SmartScreen blocks an unsafe executable: 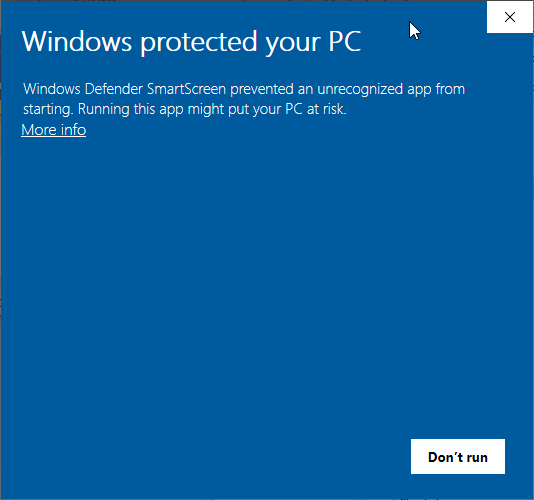 How does Windows know if a file originated from the Internet? It uses the MOTW tag associated with the file in question. If Windows Explorer or other compliant ZIP utilities are used to extract the contents of a ZIP file, each file contained within a ZIP file carries the MOTW of the ZIP file container.

From a user experience perspective, starting with Windows 8, VHD and VHDX files can have a function similar to ZIP files. That is, the user double-clicks on the file to show its contents in Windows Explorer. The important difference is that the files contained within a VHD or VHDX container do not retain the MOTW of the container file.

What does this mean from the end user's perspective? Any file contained within a VHD or VHDX file will not receive the same protections that Windows provides against files that originated from the Internet. To help understand what that means, I created a video that demonstrates several differences between a MOTW-tagged (in a ZIP) file and one that does not contain the MOTW tag (in a VHD):

I have found no evidence that any currently deployed antivirus software will scan the files contained within a VHD or VHDX file. However, for those running an enterprise, the lack of the ability to scan these files leaves a blind spot for certain files until they arrive at the endpoint. If the contents of VHD and VHDX files are not scanned by email and web gateway security products, those products have no hope of detecting malware contained within VHD or VHDX files.

I created a VHD that contains the EICAR anti malware testfile and uploaded that file to VirusTotal. Here are the results:

There is no evidence that any of the scanners configured in VirusTotal scanned the contents of a VHD file.

I performed the same EICAR test as above with VirusTotal, but this time the eicar.com file was detected within an ISO file. Here are the results:

While these results are not great, there is at least some evidence that some security products will scan the file contents of an ISO file.

VHD and VHDX files can be dangerous. Due to the combination of kernel-level file system parsing and also lack of MOTW tagging to their contents, allowing VHD or VHDX files to arrive at endpoints increases the risk presented to those systems. The following strategies can help minimize this risk: