Object-oriented programs present considerable challenges to reverse engineers. For example, C++ classes are high-level structures that lead to complex arrangements of assembly instructions when compiled. These complexities are exacerbated for malware analysts because malware rarely has source code available; thus, analysts must grapple with sophisticated data structures exclusively at the machine code level. As more and more object-oriented malware is written in C++, analysts are increasingly faced with the challenges of reverse engineering C++ data structures. This blog post is the first in a series that discusses tools developed by the Software Engineering Institute's CERT Division to support reverse engineering and malware analysis tasks on object-oriented C++ programs.

Identifying C++ classes in assembly code requires understanding low-level implementation details, such as specialized calling conventions that are not directly related to program functionality. To help analyze object-oriented software (including malware) we have been developing a suite of binary static program analysis tools. Our framework, Pharos, is built on top of Lawrence Livermore National Laboratory's (LLNL) ROSE compiler infrastructure. The Pharos tool suite includes many extensions to the binary analysis features of ROSE that we've jointly developed with LLNL. The Pharos tools use static analysis techniques, such as control flow analysis and dataflow analysis, to reason about the behavior of, and data structures in binary files.

One of our Pharos tools, ObjDigger, supports analysis and recovery of object-oriented data structures from 32-bit Microsoft Windows binary files. Specifically, ObjDigger can help recover C++ classes/structures including class members, methods, and virtual functions. ObjDigger can also help reason about class relationships, such as composition and inheritance. This posting describes the ObjDigger tool, how it works, and how to use it to help reverse engineer object-oriented C++ code.

For example, consider the simple C++ program below in Code Listing 1 that instantiates an object and then calls a virtual function. This relatively straightforward code results in many implicit operations when compiled. 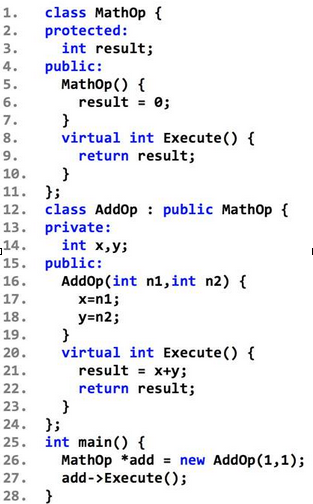 The program in Code Listing 1 was compiled using a 32-bit version of Microsoft Visual C++ 2010 with no command-line options except for the /FAsc option to generate x86 assembly code. The disassembly of the main function is shown below in Code Listing 2. First, an AddOp object is instantiated and assigned to a MathOp pointer, although the types are not immediately clear from the listing. Instantiating the AddOp object requires multiple steps that are not visible in source code. First, object memory is allocated from addresses 0x00401006 through 0x00401017. Second, the AddOp object is initialized from addresses 0x00401019 through the call to the constructor at address 0x00401020. 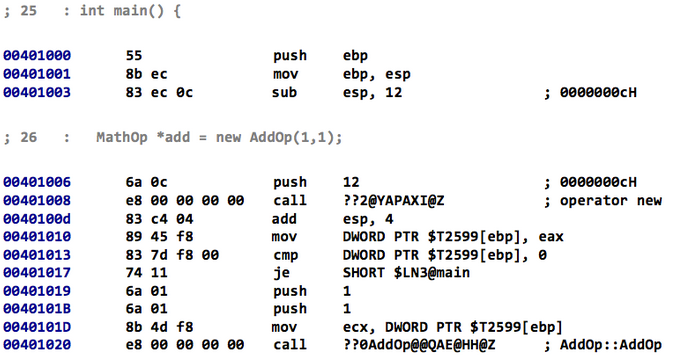 Note that the allocated memory for the AddOp object is passed to the AddOp constructor via the ECX register. This code is consistent with the __thiscall calling convention that is used to implement class mechanics, such as method invocation and member access in assembly code. Passing function arguments through registers, however, can be hard to detect. The body of the AddOp constructor, which is shown below in Code Listing 3, demonstrates additional complexities. 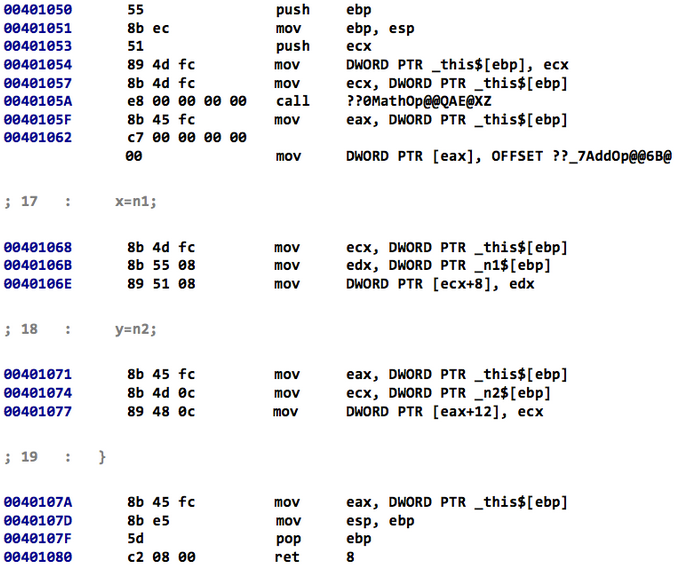 ObjDigger automates recovery of C++ data structures. It identifies potential class structures and methods and resolves virtual function calls where it can. Compiling the program in Code listing 1 and running the executable through ObjDigger with the --report option produces the output shown in Table 1. 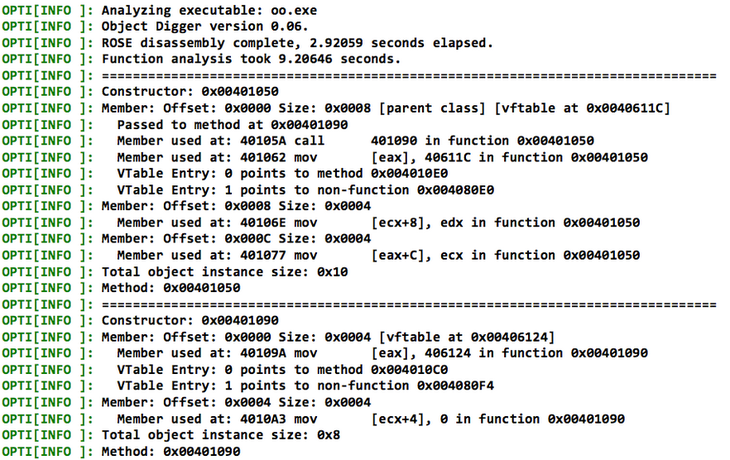 Note that the names used in the source code are removed during compilation, but the tool is able to identify class data structures. For example, ObjDigger identifies AddOp as a data structure with the following constructor:

Table 2: AddOp Constructor Disassembly before and after Running the PyObjdigger Plugin 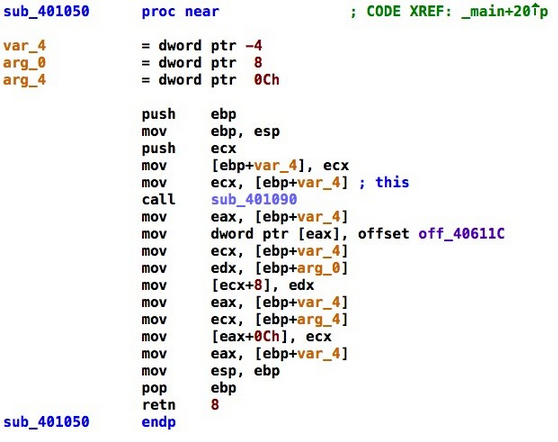 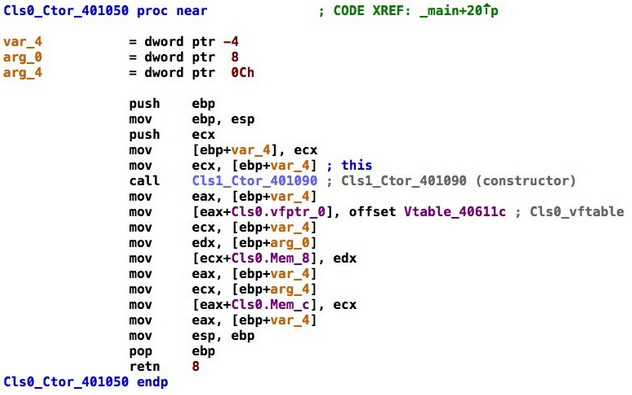 The Pharos binary analysis infrastructure provides information on which program instructions influence (i.e., read and write) computations on subsequent instructions. This abstract interpretation of instructions makes it possible to track values through an assembly listing. Reasoning about abstract values as they are accessed through a program enables identification of object-oriented constructs. For example, a call to a virtual function requires two pointer dereferences:

ObjDigger uses similar data flow analysis to identify class members and methods and class relationships. A more thorough, if slightly dated, discussion of the ObjDigger's data structure recovery algorithms is available in our paper titled Recovering C++ Objects From Binaries Using Inter-Procedural Data-Flow Analysis that was published at the ACM SIGPLAN on Program Protection and Reverse Engineering Workshop in 2014.

This post shows how binary static analysis tools, such as ObjDigger can help reverse engineers and malware analysts by automatically reasoning about C++ data structures at the binary level. Processing an object-oriented executable file with ObjDigger helps the analyst to quickly identify and understand the data structures in an executable file. Automatically recovering information about C++ data structures enables analysts to focus on reasoning about program functionality and spend less time analyzing low-level constructs that are inserted during compilation and have little bearing on program behavior. Automatic analysis of executables has more applications than dealing with object oriented code. In subsequent posts in this series we will discuss some of the other tools in the Pharos suite that automatically identify and reason about program behaviors.

We welcome your feedback on our work in the comments section below.

We recently released ObjDigger publicly, and those who are interested in evaluating ObjDigger can download it from the Pharos Static Analysis Tools site.

We have also created a GitHub repository for Pharos, and plan to release selected components of our framework for inclusion back into the ROSE infrastructure.