If you want to be secure in the Windows world, you should be running Microsoft EMET. If you are running Windows Vista or later, EMET mitigates nearly the entire class of memory corruption vulnerabilities by using DEP, ASLR, ROP, and other mitigations. A tool like EMET is possible because, with Windows, ASLR can be enabled for programs and libraries that weren't explicitly built to support it.

Running this command displays the memory maps for the current process, which is cat in the above case. First let's look at the default UbuFuzz virtual machine, which is the VM provided with the CERT BFF (UbuFuzz has ASLR disabled): 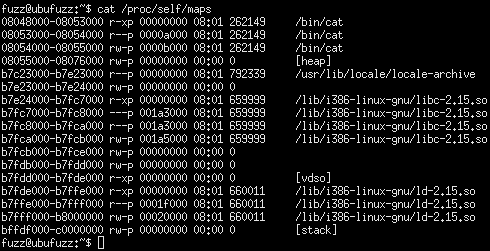 Every time the above command is executed, the code is located in the same place. From an exploitability perspective, this approach is bad because an attacker can predict the location of code in memory, which enables the use of ROP or return-to-libc style attacks.

Let's now enable ASLR by commenting out the kernel.randomize_va_space=0 line in /etc/sysctl.conf. Ubuntu has ASLR enabled by default, but this feature is disabled in the UbuFuzz VM to simplify fuzzing. Once ASLR is re-enabled, we run the test again: 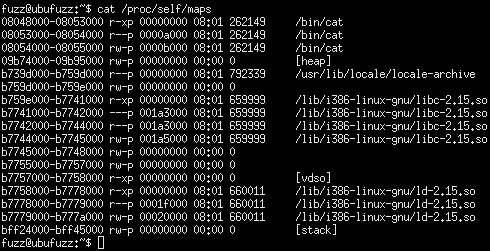 As it turns out, it's possible to enable additional exploit mitigations in Linux. Unfortunately, the mitigations are not part of the vanilla Linux kernel. Therefore, you need to get the Linux kernel sources, apply a patch, and build your own kernel. The particular patch in question is provided by grsecurity, which also includes PaX. This patch provides additional protections that help enhance the security of a system, including various memory protections provided by PaX.

Compiling and patching your own kernel may sound scary, but it's actually not too difficult. The Insanitybit blog has provided guidance for how to build a grsecurity kernel for Ubuntu. Grsecurity has since been updated to allow an automatic configuration, which makes configuration easier. Let's run the same test on the same UbuFuzz system, but with the grsecurity kernel: 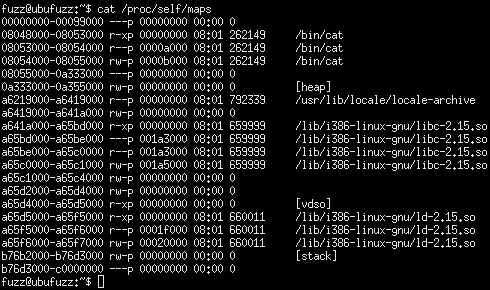 Gentoo Linux is one of the few Linux distributions where packages are compiled from source code, rather than provided in binary format like Red Hat or Ubuntu. Setting up a Gentoo Linux system requires more "wall clock" time due to compilation requirements, and it also requires more human interaction than most other Linux distributions to configure and tweak the system to work smoothly. At least the prevalence of multi-core computer systems these days makes compilation a bit less time consuming than it was in the past. 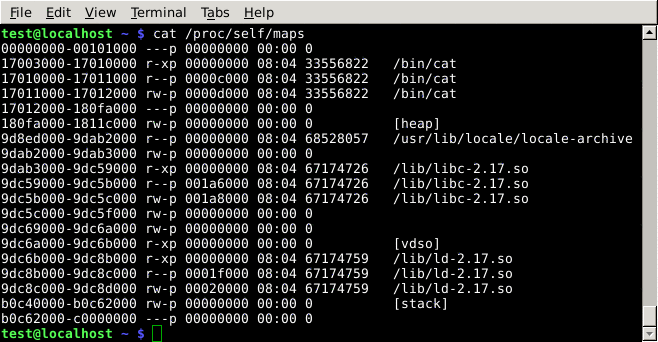 Here we can see that everything is randomized, including the executable, and the entropy is higher than a vanilla Linux system. Exploiting a memory corruption vulnerability on such a system would be quite difficult.

It is also possible to run Gentoo with a vanilla Linux kernel, but configure the toolchain to enable PIE and other protections. Packages built after this change is made will be compiled with the protections. While a system configured in this way will not be as secure as a system that runs the hardened Linux kernel, this technique may be a compromise for environments where the hardened kernel cannot be used.

In the above examples, cat provides a simple example that can visualize the effects of ASLR. However, cat really isn't a high-risk application, and due to its trivial nature, we don't expect vulnerabilities to be discovered in it. How can we check the exploit mitigation features of arbitrary programs? The script checksec.sh by Tobias Klein is useful for this purpose. Let's look at the ffmpeg program, which has a large attack surface; we can expect it to contain a number of vulnerabilities. First, on Ubuntu:

Any properties that are not green are not the most secure. In this particular case, we can see that ffmpeg on Ubuntu is not compiled with PIE, and therefore will not receive the security benefit of ASLR. This binary also only uses Partial RELRO.

Let's look at ffmpeg on a Hardened Gentoo system:

In this case, all of the exploit mitigations are present.

Compared to Windows, enabling extra exploit mitigations on Linux requires a bit more work. Although the tests demonstrated in this blog entry focus on the ASLR aspect, a grsecurity-patched (and therefore PaX-enabled) Linux system provides a large number of protections that can make exploitation more difficult. At least on x86, some of these protections may have a noticeable performance impact. While a Hardened Gentoo platform may enable the most exploit protections for the most parts of the system, this approach may not be for everyone. If you are looking to enhance the security of your Linux system, it may be worth looking into at least building a grsecurity-enabled kernel for the Linux distro that you are already using.