Static analysis tools analyze code without executing it, to identify potential flaws in source code. These tools produce a large number of alerts with high false-positive rates that an engineer must painstakingly examine to find legitimate flaws. As described in Lori's first blog post on this topic, we in the SEI's CERT Division have developed the SCALe (Source Code Analysis Laboratory) tool since 2010 as part of our research on new ways to help analysts be more efficient and effective at auditing static analysis alerts.

We develop the SCALe tool with new features to enable research, for instance to gather metrics on the effect of the new features or to enable SCALe audit archives to have higher quality data and develop better automated alert classifiers. In August 2018 we released a version of SCALe (version 2) to the public (open source via Github). This blog post describes new features and capabilities we have added in our ongoing development of SCALe.

Lori Flynn is the principal investigator leading research on static analysis alert classification and advanced alert prioritization from late 2015 through the present, and her research project teams have done almost all the SCALe development during that time. Co-author Ebonie McNeil has been involved with this research since December 2017, and has made significant contributions to the development of SCALe. SCALe developers on Lori's research project teams since late 2015 also including David Svoboda, William Snavely, Derek Leung, Jiyeon Lee, Lucas Bengston, Jennifer Burns, Christine Baek, Baptiste Vauthy, Shirley Zhou, Maria Rodriguez De La Cruz, and Elliot Toy.

The latest release of the SCALe tool is version 3.0, which is currently a non-public research prototype that we share only with collaborators. In this release, we have added many features and fields to provide automated classification and advanced prioritization of static analysis alerts. We describe these enhancements in this post. We also describe plans to connect this enhanced version of SCALe to an architecture that will provide classification and prioritization of alerts via application programming interface (API) calls. The research project team is developing a prototype that instantiates the architecture, and we are working to complete the prototype and integrate it with latest version of SCALe.

SCALe provides a graphical user interface (GUI) front end for auditors to examine alerts from one or more static analysis tools and the associated code, to make determinations about an alert (e.g., mark it as true or false), and export the project audit information to a database or file. The publicly released version of SCALe can be used for auditing software in four languages (C, C++, Java, and Perl) and two code-flaw taxonomies [SEI CERT coding rules and MITRE's Common Weakness Enumeration (CWE)]. To learn more about SCALe, see SCALe: A Tool for Managing Output from Static Analysis Tools.

The two figures below illustrate the evolution of the SCALe tool from version 1.0 (prior to the research project enhancements begun in late 2015) to version 3.0, which is the current working version. 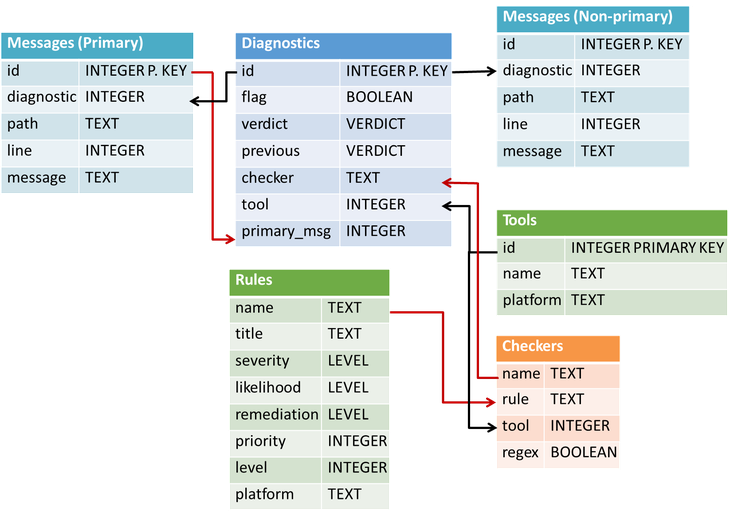 The following modifications to the initial version of the SCALe databases include new features important for prioritization and classification integration:

The database design in Figure 2 shows the new format of an exported SCALe project (in sqlite3 database format). 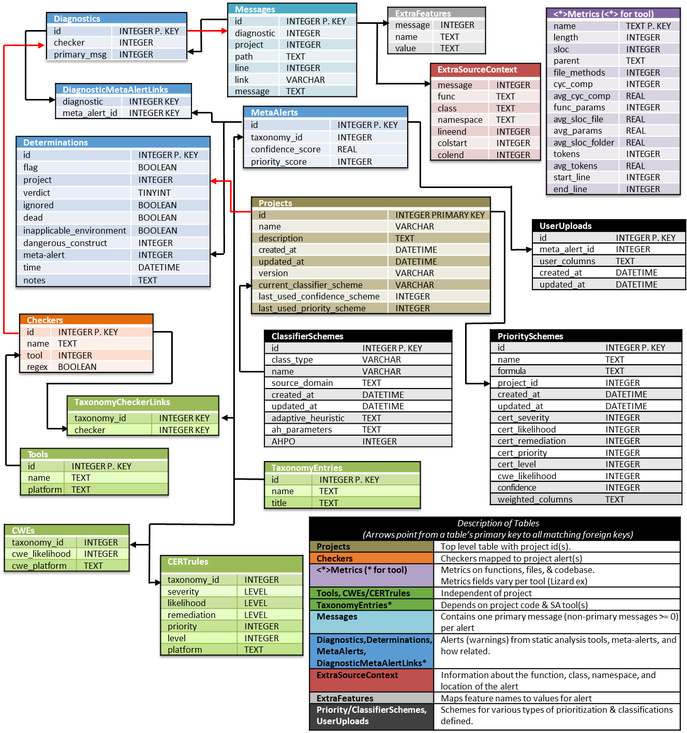 The following sections briefly describe new functionalities added in v 3.0 of SCALe that weren't described in our previous blogpost.

Selection of a Priority Scheme

Prioritization-scheme selection allows users to prioritize static analysis alerts using factors they care about, as shown in the figure below. The formulas can combine classifier confidence and other values (e.g., risk, cost) used by the system. 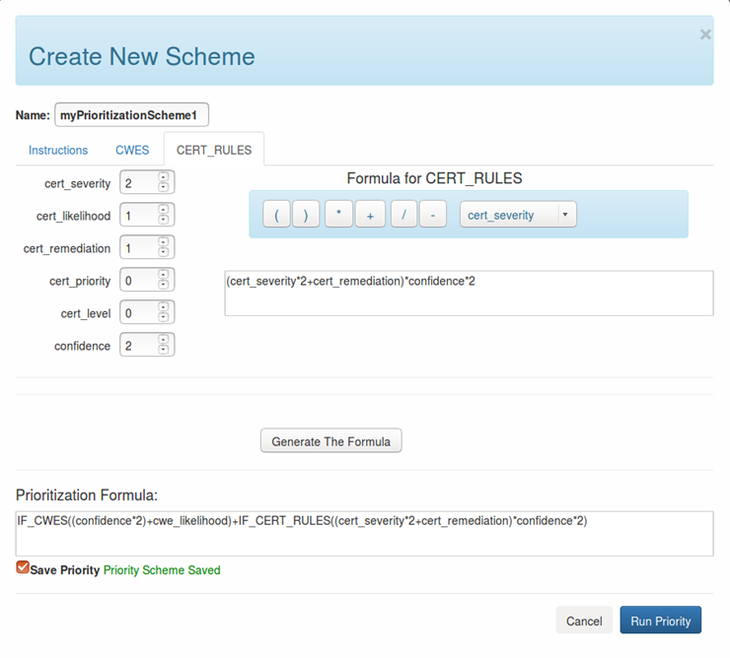 Uploaded fields can currently be used in prioritization formulas, but cannot be viewed in the GUI. Future versions of SCALe will include the fields in the GUI.

The upload-fields option is intended for advanced users who can work with SQL databases and who have or can generate values for new fields (e.g., based on advanced logic using the other alert fields or based on proprietary data). An extended and more user-friendly version of the concept, however, could be added without technical difficulty beyond standard development. This addition would enable less technical users to generate values for new fields using mathematical formulas, advanced logic, and data beyond that provided in the initial SCALe database.

Ability to Select and Run a Classification Scheme

Although classification is not available in the current version of SCALe, we have integrated many features required for classification into it. Interfaces are provided for user testing and feedback.

The user selects one of the three options shown in Figure 4. The interface displays three options: Xgboost, Random Forest, and Logistic Regression.

Figure 4: Selection of a Classifier Scheme

After a classifier type is selected, a popup window appears with the following options:

After selecting a classification scheme, the user will be able to click a "Classify" button that will cause meta-alerts to be classified (e.g., level of confidence true or false will be predicted).

This feature allows a user to take determinations made from a previous SCALe audit and automatically apply them to alerts generated by a new SCALe audit. The section Upload Determinations from Project in the Edit Project screen (shown in Figure 5, with red arrows pointing to where users must make selections) provides this functionality. It uses the UNIX diff utility to determine if a code line within a file from a previous version of a code base matches a code line within the current version of the code base. If the lines match and there was a previously made determination for the meta-alert, then it infers the same determination for the current meta-alert. A new note with a timestamp is added that identifies the determination as being cascaded. 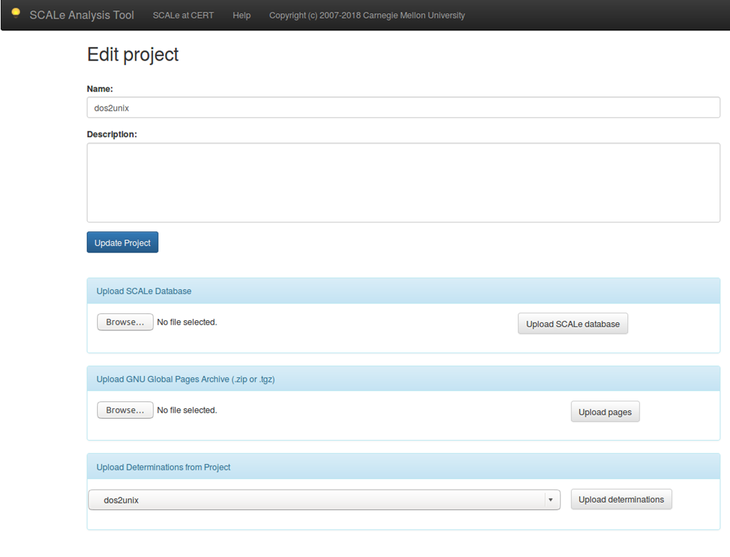 Next Steps and Future Work

In the future, SCALe will interact with the other parts of the architecture and three other servers will provide external functionality. Currently, the enhancements to SCALe provide advanced prioritization and much of the classifier functionality that will be required in SCALe for a fully integrated system. Our research project team will soon publish the architecture model and the beta version of our API for the architecture. After that, we will publish a third blog post in this series.

We hope that potential collaborators will read about what we are doing with SCALe and contact us if they want to collaborate. (Collaborators are invited to implement the API from their alert auditing tool and provide feedback, to test SCALe and provide feedback, and/or to send us sanitized alert audit data with manual auditor determinations.) Other interested users should watch the SEI website for announcements about the planned public release of SCALe v 3.

Read the blog posts in this series of posts on SCALe.

Look at the SEI webpage focused on our research on static analysis alert automated classification and prioritization.

Read the SEI Technical Note, Supporting the Use of CERT Secure Coding Standards in DoD Acquisitions.