Static analysis tools analyze code without executing it to identify potential flaws in source code. Since alerts may be false positives, engineers must painstakingly examine them to adjudicate if they are legitimate flaws. Automation is needed to reduce the significant manual effort that would be required to adjudicate all (or significantly more of) the alerts. Many tools produce a large number of alerts with high false-positive rates. Other tools produce alerts for only a limited set of code flaws that have a very low rate of false positives; while this reduces the rate of false positives, real code flaws remain in codebases, despite the absence of alerts about them. The SEI Source Code Analysis Integrated Framework Environment (SCAIFE) application programming interface (API) defines an architecture for classifying and prioritizing static analysis alerts. In this blog post, we describe new techniques that help users instantiate SCAIFE API methods and integrate them with their own tools.

Covering more code-flaw types takes more development (and sometimes research) effort, so most tools provide alerts for only a subset of known code-flaw types. Previous analyses have shown that commonly used static analysis tools' coverage of code flaws is only partially overlapping, so multiple tools are often used to gain analysis of more code flaws. However, the use of multiple tools compounds the problem of having too many alerts that must be adjudicated manually as true or false.

The increasingly common standard DevOps practice of continuous integration (CI) results in frequent updates to working code. This practice generates a proliferation of static analysis alerts that can be hard for engineers to manage in the short time frames required by CI.

SCAIFE enables engineers to apply resources to the most critical issues identified by static analysis tools. In particular, it considers classifier-derived confidences and an organization's mathematically defined priorities related to characteristics of flaws and related code that they want to address first.

The SCAIFE architecture is designed so that a wide variety of static analysis tools, classification and related active-learning/adaptive heuristics and hyper-parameter optimization, static analysis project-data aggregation systems, prioritization methods, and registration modules can integrate with the SCAIFE system using an API. This API can be used by organizations that develop or research tools, aggregators, and frameworks for auditing static analysis alerts. The techniques I describe in this post allow users' tools to send and receive SCAIFE API calls.

The SCAIFE system provides an architecture with APIs and an open-source prototype system. Benefits to users include the following:

The SCAIFE architecture includes five servers and supports static analysis meta-alert classification and prioritization for a wide variety of tools, as shown in Figure 1. The system is modular so that each module can be instantiated by different tools or software while the overall system maintains the same functionality. 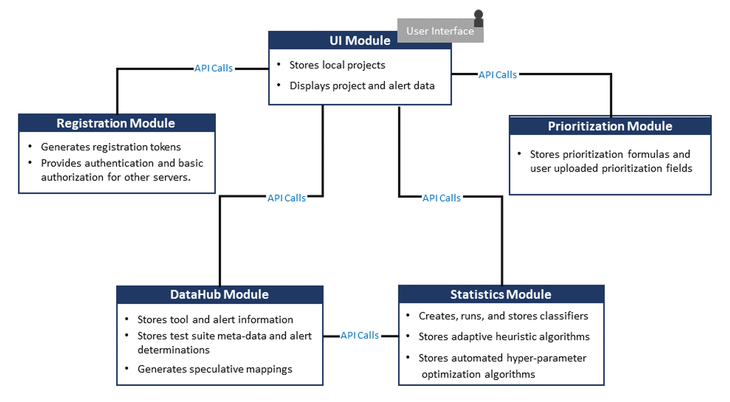 The following is a summary of the modules shown in Figure 1:

Developers can use these techniques to enable their tools (when configured as servers) to receive SCAIFE API calls and to make SCAIFE API calls (when configured as clients). In both cases, they need to develop some internal SCAIFE-required logic in their tools. The modular SCAIFE system enables substitution of any of the five types of SCAIFE modules shown in Figure 1.

The SCAIFE manual is useful whether users have full, partial, or no access to SCAIFE system code that we developed at the SEI. The manual will be used in different ways, however, depending on the extent of the user's access to that code.

We expect the UI module to be the most common SCAIFE module that developers will want to instantiate, in this order of priority:

How to Get Started With the API

Most developers of flaw-finding static analysis (FFSA) tools and alert-aggregator frameworks (such as SCALe and SWAMP-in-a-box) will be interested in the UI module's API definition. To enable their tool to interact with the SCAIFE system, their tool needs to instantiate the UI module's API.

Some researchers/developers, however, will focus on the Statistics module's API to improve classification, active learning, and automated hyper-parameter optimization. If they are collaborating with the SEI on research, they can develop new algorithms and modularly incorporate them within the full SCAIFE-system prototype we have developed. If not, they can simply modify their own tools to instantiate the Statistics module's API and then interact with a SCAIFE system with other modules developed by various sources (e.g., for a UI module they could use the version of SCALe that we developed to work modularly with SCAIFE from https://github.com/cmu-sei/SCALe/tree/scaife-scale but they could either develop their own modules for the remaining three SCAIFE modules or use modules developed by others such as collaborators or, we hope in the future, open-source projects shared publicly for all the SCAIFE modules).

Similarly, some researchers or developers want to improve performance, security, resilience, and scalability of aggregated--and what is eventually expected to be large--data storage. Those users will therefore want to focus on the DataHub module's API. We expect a smaller number of researchers and developers to implement the Registration or Prioritization modules in research projects focused on those. These APIs will still be useful to review and implement, however, because other servers need to interact with them, whether in a client or a server role.

Looking Ahead and Next Steps

One of our DoD collaborators plans to begin instantiating API calls soon. Our new manual is also intended to help additional collaborators that are interested in integrating their tools with the SCAIFE system. We welcome additional DoD organizations that wish to collaborate with us to contact us at info@sei.cmu.edu.

Although the manual is most useful for readers who can currently access the SCAIFE code, the manual also can help non-DoD users understand how the API calls can be implemented efficiently without requiring SCAIFE code, with a partial set of implemented SCAIFE code (SCALe module only), and with the fully implemented SCAIFE code (regarding the latter, we hope to eventually make this publicly available). These users can also learn how to test their own servers if they instantiate SCAIFE API servers and then use the described methods, e.g., using the publicly available SCALe (scaife-scale branch) server with a new Registration server that they instantiate.

We expect that our September public release of the research version of SCALe (https://github.com/cmu-sei/SCALe/tree/scaife-scale) will promote broader adoption of the SCAIFE API and enable more users to process and manage their static analysis alerts successfully.