Some might wonder how easy it might be to fall victim to an MITM attack. The KARMA attack, which was outlined over ten years ago, can cause a client system to unknowingly connect to an attacker's Wi-Fi, allowing an MITM attack. Despite the age of this attack, I've found that it can still be effective on modern platforms.

The KARMA attack takes advantage of clients that send probe requests to determine which wireless networks are nearby. The attack is relatively straightforward, but I find that some pictures can help illustrate the situation. First, let's look at an association that is not vulnerable to KARMA:

The Wi-Fi access point periodically sends out a beacon frame that indicates the network SSID, which identifies the Wi-Fi network. When a client system receives a beacon frame with an SSID that it remembers, it may associate with the wireless network.

Now let's look at a client system that is vulnerable to KARMA:

Rather than passively monitoring beacon frames from access points, the client here sends out a probe request for networks that it knows about. The KARMA attack becomes obvious. The attacker simply needs to listen for the client to send a probe and respond as the SSID that the client requested. The impact is that a client system may connect to a network other than the one the user expects. At this point, the attacker can perform MITM or other attacks on the client system.

Before getting into too much detail about KARMA, it's important to understand how most wireless networks handle authentication. When you connect to an open wireless network called "coffeeshop," how do you know that it really is the coffee shop that you think it is? The short answer is that you don't. In the case of an open Wi-Fi network, the SSID is pretty much the only thing that a client uses to determine what network is being advertised. And the SSID is something that is easily under an attacker's control.

If an attacker is hanging out in your coffee shop and has a stronger signal or if he/she otherwise interferes with the legitimate coffee shop wireless access point, customers will likely connect to the attacker's access point. And at this point, the attacker can carry on any MITM or other attacks that he/she likes. This is known as the evil twin attack.

For wireless networks that use encryption, such as WPA2, a client system will not associate with an access point that does not use the same passphrase. This practice prevents a client system from immediately connecting to the network; however, it can give the attacker the ability to crack the password if it's weak.

KARMA improves on the simple evil twin attack. The evil twin attack requires the attacker to be in range of the user's intended network to attack. However, with KARMA, an attacker can target client systems even when they are away from the networks they use. For example, if I am using a client system that is vulnerable to KARMA, my client may associate to a wireless access point that identifies itself on-the-fly as "coffeeshop," even if my real "coffeeshop" network is hundreds of miles away.

The other way that KARMA is more effective than the evil twin attack is that it is a more subtle attack. If my coffee shop notices a rogue access point with the same SSID of "coffeeshop," then it's pretty clear that there is some sort of foul play going on. With KARMA, the attack is more subtle in that the attacker does not broadcast the SSIDs that he/she is attacking. The rogue access point simply responds on demand to whatever probes it receives.

When setting up a wireless network, some people may choose to enable the feature to hide the SSID. Originally, the thinking was that if the SSID is not broadcast, then it will be less likely to be targeted with an attack. By now, the myths about a hidden SSID being more secure have been debunked. The most important part related to KARMA is that if your client is configured to connect to hidden SSIDs, it will send out probes for those networks.

Since the KARMA attack is over ten years old, it surely doesn't affect modern platforms, right? Sadly, that's not the case. Many modern platforms can be affected by KARMA in some way.

One platform that is still vulnerable to KARMA is Mac OS X. Even with the latest Yosemite version (10.10.4), turning on Wi-Fi will cause probes to be sent. If OS X has at least one open network remembered, then it could associate with a KARMA attacker's network without the user noticing.

I tested Windows 7. By default, Windows does not send out probes for wireless networks, and therefore does not appear to be vulnerable to KARMA. However, I discovered that the wireless adapter that I was using for testing can make Windows vulnerable to KARMA. When installing the affected software, the default option is to install the driver and a wireless configuration utility. There is an optional way of running the installer that only installs the driver. As it turns out, the wireless configuration utility configures Windows in a way that makes it vulnerable.

When the affected software is used to connect to a wireless network, it creates a Windows network profile that is vulnerable to KARMA: 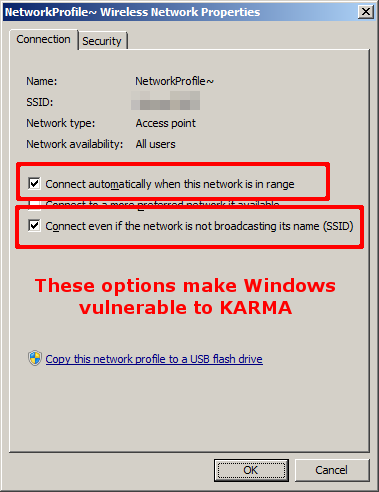 The option to "Connect even if the network is not broadcasting its name (SSID)" guarantees that Windows will send out a probe request, and the "Connect automatically when this network is in range" option causes the network connection to happen without any user interaction. Those two options combined result in a KARMA-vulnerable system.

There are plenty of different Linux distributions. Even within a single distribution, you can end up with various configurations that use different network managers. I looked at the default install of the most recent LTS desktop release of Ubuntu, which is 14.04. This platform is vulnerable to the KARMA attack. It will send probes for networks that it has connected to in the past and will happily connect to an attacker's KARMA network.

In my testing, Apple IOS devices fared well against KARMA. However, if an attacker is within radio range of the network being joined, an IOS device may join the attacker's KARMA network rather than the intended one.

It's probably obvious by now that it would be impractical to list the KARMA vulnerability status of all things that talk Wi-Fi. In my testing, I used a MAC address whitelist to limit Wi-Fi associations to my own devices. However, during the testing, some other devices nearby attempted unsuccessfully to associate with my KARMA hotspot. I saw an association attempt from a Barnes & Noble MAC address. One might conclude from this that at least one version of the NOOK is vulnerable to KARMA. I also saw an association attempt from a Blackberry Limited MAC address. So at least some form of a Blackberry device is vulnerable to KARMA. These days almost everything talks Wi-Fi, so comprehensively testing all the Wi-Fi-enabled things is not practical.

Vulnerability to KARMA is not a black-and-white situation. There are multiple factors that can affect how vulnerable a system is to KARMA. Some platforms are definitely more vulnerable than others. What are we to do about it then? Luckily, there are actions that we can all take.

To be on the safe side, assume that your device IS vulnerable to KARMA. When using a KARMA-vulnerable system, there are several precautions that you can take to limit your exposure: