When Agile software development models were first envisioned, a core tenet was to iterate more quickly on software changes and determine the correct path via exploration--essentially, striving to "fail fast" and iterate to correctness as a fundamental project goal. The reason for this process was a belief that developers lacked the necessary information to correctly define long-term project requirements at the onset of a project, due to an inadequate understanding of the customer and an inability to anticipate a customer's evolving needs. Recent research supports this reasoning by continuing to highlight disconnects between planning, design, and implementation in the software development lifecycle. This blog post highlights continuous integration to avoid disconnects and mitigate risk in software development projects.

To achieve an iterative, fail-fast workflow, Agile methodologies encouraged embedding customer stakeholders full time with the development team, thereby providing in-house, real-time expertise on customer needs and requirements. In essence, Agile methodologies have created a constant, real-time feedback loop between customer subject matter experts and software development teams. In a previous post, I presented DevOps as an extension of Agile principles. Consistent with this definition, DevOps takes the real-time feedback loop concept and extends it to other points in the software development lifecycle (SDLC), mitigating risks due to disconnects between developers, quality assurance (QA), and operations staff, as well as disconnects between developers and the current state of the software.

For example, continuous integration (CI) offers a real-time window into the actual state of the software system and associated quality measurements, allowing immediate and constant engagement of all team members, including operations and QA, throughout the project lifecycle. CI is a form of extreme transparency that makes sure that all project stakeholders can monitor, engage, and positively contribute to the evolving software project without disrupting the team with constant status meetings or refocusing efforts.

Due to their powerful capabilities, CI servers have evolved to perform (and therefore, verify) other important quality metrics automatically, such as running test suites and even automatically deploying applications into test environments after a successful integration. As DevOps practice matures, my expectation is that CI systems and tools will continue to evolve as a central management system for the software development process, as well as testing and integration. One of the research areas my team is exploring is ways to enhance software security by adapting effective security testing and enhancement tools to run efficiently within the constraints of CI, a topic I will explore further in the next installment of our ongoing series on DevOps.

As I stated in the second post in this series, DevOps, in part, describes techniques for automating repetitive tasks within the software development lifecycle (SDLC), such as software builds, testing, and deployments, allowing these tasks to occur more naturally and frequently throughout the SDLC.

I oversee a software engineering team that works within the SEI's CERT Division that focuses on research and development of solutions to cybersecurity challenges. When developers on my team write code, they test locally and then check the code into a source control repository. We focus on frequent code check-ins, to avoid complex merge problems. After code is checked in, our CI system takes control. It monitors the source code repositories for all projects and pulls an updated version of the code when it detects a new commit. If the project is written in a compiled language (we use many different languages and frameworks regularly), the server compiles and builds the new code. The CI server also runs associated unit test suites for the project. If prior steps succeed, the server runs pre-configured scripts to deploy the application to a testing environment. If any of these processes fails, the CI server fails the build and sends immediate failure notifications to the entire project team. The team's goal is to keep the build passing at all times, so a developer who breaks the build is expected to immediately get it back on track. In this way, the CI server helps to reinforce the habit of thoroughly testing code before committing it, to avoid breaking the build and disrupting the productivity of your team members.

Without this QA process, a developer may check broken code into a central repository. Other developers may make changes that depend on this broken code, or attempt to merge new changes with it. When this happens, the team can lose control of the system's working state, and suffer a loss in momentum when forced to revert changes from numerous developers to return to a functional state.

CI servers (also known as build servers) automatically compile, build, and test every new version of code committed to the central team repository, ensures that the entire team is alerted any time the central code repository contains broken code. This severely limits the chance for catastrophic merge issues and loss of work built upon a broken codebase. In mature operations, the CI server may also automatically deploy the tested application to a quality assurance (QA) or staging environment, ensuring the Agile dream of a consistent working version of software.

All the actions described above are performed based on automated configuration and deployment scripts written collaboratively by development and operations engineers. The collaboration is important--it ensures that operations expertise in deployment needs and best practices is represented in the development process, and that all team members understand these automated scripts and can use and enhance them. This collaboration also sets the stage for use of the same scripts to eventually deploy the system into production environments with high confidence, a process known as continuous deployment, which is a topic for a later post. 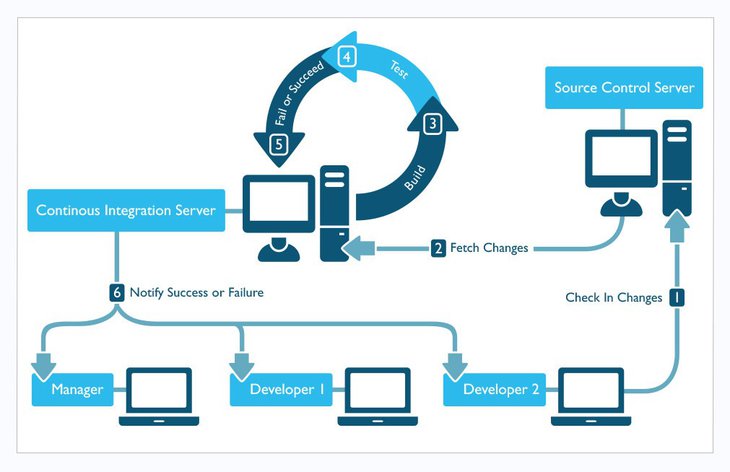 With CI, when developers check in bad code, the system will automatically notify the entire team within minutes. This notification of failure can also be applied to failing functional tests, failing security tests, or failing automated deployment processes, creating an immediate feedback loop to developers to reinforce both software functionality and quality standards. This process helps the team to manage the development of complex, multi-faceted systems without losing sight of defects arising in previously completed features or overall quality. The CI process should be designed to reinforce the quality attributes most important to your system or customer:

Think of continuous integration as your gatekeeper for quality control. Design your failure rules to enforce continual adherence to the quality measures that are most important to your organization and your customers.

While CI is by no means a new phenomenon, the DevOps movement underscores its importance as a foundational technique for software process automation and enforcement. There are many popular CI systems, including Jenkins, Bamboo, Teamcity, CruiseControl, Team Foundation Server, and others. The variety of systems means that any team should be able to find a tool that both meets its needs and integrates well with the technology stack(s) it employs.

For more information on this and other DevOps-related topics, every Thursday the SEI publishes a new blog post offering guidelines and practical advice to organizations seeking to adopt DevOps in practice. We welcome your feedback on this series, as well as suggestions for future content.