Each year, the CERT Division of the SEI collaborates with CSO Magazine to develop a U.S. State of Cybercrime report1. These reports are based on surveys of more than 500 organizations across the country, ranging in size from fewer than 500 employees to more than 10,000. Each organization self-reports on information security issues that have impacted them in the past calendar year. The 2017 report covers activity that occurred in 2016. In this blog post, we share some of the findings from the upcoming report as they relate to insider threats.

Nearly 30 percent of all respondents reported that incidents caused by insider attacks were more costly or damaging than outsider attacks.

Excluding participants unsure of the costs of incidents, nearly half (43%) of survey respondents reported that electronic crimes committed by insiders were more costly than those committed by outsiders. These figures are on par with those reported in the 2016 U.S. State of Cybercrime report.

According to the responding organizations, insiders were the source (or cause) of the following:

The number of incidents attributable to insiders where employee records were compromised or stolen increased by 5% in the 2017 survey compared to the 2016 survey.

Nearly a third of participants experienced an insider incident.

In the 2017 survey, only 34% of survey participants experienced an incident and only one in five (20%) attacks were committed by insiders. However, in the 2016 survey, as many as 43% percent of survey participants reported that an insider incident was committed against their organization and that more than one in four of the attacks against their organization were committed by insiders (27%). In other words,

The following graph illustrates how the rates described above have changed somewhat over time: 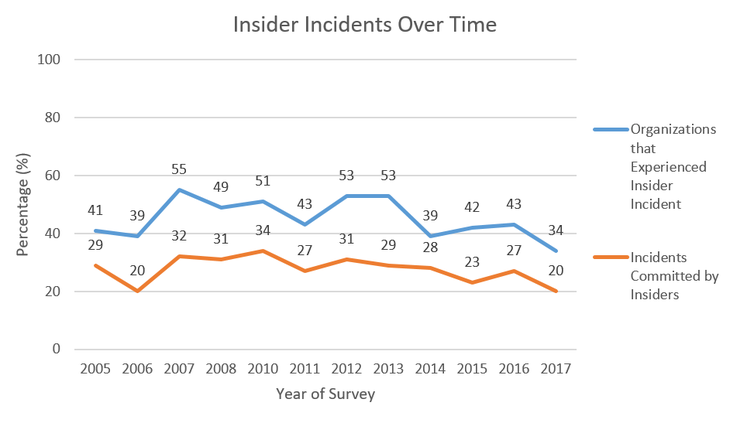 Although the proportions may have decreased both for organizations experiencing an incident and for incidents committed by insiders, this change may not hold for the future. As the graph shows, there are slight increases and decreases over time. For that reason, while there may have been a slight decrease between the 2016 and 2017 surveys, that is not to say that there will be less incidents by the time of the 2018 survey.

One of the benefits of conducting an annual survey is the ability to note changes, or a lack thereof, over time. In the following table, note the consistency of the strategies used to respond to insider intrusions from the 2015 to 2017 surveys, despite the drop in incidents between the 2016 and 2017 surveys.

Note: Percentages are rounded up to the nearest percent.

In contrast, the following table shows that the perceptions of insider incidents have changed in some areas over the past year.