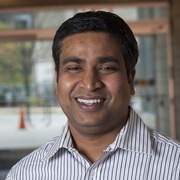 Warfighters in a tactical environment face many constraints on computational resources, such as the computing power, memory, bandwidth, and battery power. They often have to make rapid decisions in hostile environments. Many warfighters can access situational awareness data feeds on their smartphones to make critical decisions. To access these feeds, however, warfighters must contend with an overwhelming amount of information from multiple, fragmented data sources that cannot be easily combined on a small smartphone screen. The same resource constraints apply to emergency responders involved in search-and-rescue missions, who often must coordinate their efforts with multiple responders. This posting describes our efforts to create the Edge Mission-Oriented Tactical App Generator (eMontage), a software prototype that allows warfighters and first responders to rapidly integrate geotagged situational awareness data from multiple remote data sources.

An Abundance of Siloed Data

While the internet has made data more accessible than ever, the information is often siloed in different systems. To complicate matters, it's not easy for warfighters to share and tailor data in the field. Typically, data filters are predefined at development time and are often not flexible enough to meet the range of unanticipated requirements that warfighters and first responders may have in the field. The modifications required to support newer capabilities is often done offsite and, therefore, takes longer to reach the hands of users. These delays are problematic for warfighters, who need the ability to configure data sources as quickly as possible.

Using a system that we are prototyping here at the SEI, a warfighter would be able to mash up data from these sources, as well as public data sources (such as Google Places, Twitter, or FourSquare) and/or private Department of Defense (DoD) data sources.

More Control to the End User

Our research at the SEI is focused on giving more control to the end users, in this case warfighters and emergency responders. In particular, we provide them the ability to define data filters at runtime without writing code and mash up data from different sources, so that they can access the information that they need, when they need it, on their device. To enable this capability, I am working with a group of SEI researchers, including Gene Cahill, on the development of eMontage, a Java-based client/server application that allows users to create data filters on Android smartphones. We built eMontage using commercial off-the-shelf components, as well as public and private data sources.

eMontage allows users to mash geotagged data from private and public information sources and combine relevant data on one application and screen. The eMontage architecture allows for the addition of both public and private data sources in a relatively short amount of time. In this context, "short" translates to a few hours to a week, depending on the data format and application programming interface (API) support provided by the remote data source or web service.

We are collaborating with Dr. Brad Myers and his student, Kerry Chang of Carnegie Mellon University's Human Computer Interaction Institute. Dr. Myers has collaborated with us on previous initiatives in this arena. They are working to help us define an appropriate interface for soldiers to use the handheld software in the challenging situations they face.

We are also collaborating on a parallel effort that deals with an interface for rapid entry of unstructured information into a smartphone. In the implemented prototype, known as Listpad, the user enters unstructured text as he or she would on a notepad, but the information is saved in a structured format. Through contextual clues, Listpad autocompletes data entry and also allows for automatic data-type detection.

Testing Our Prototypes and Approach

In 2012, we tested our prototypes at Camp Roberts in the United States Special Operation Command Naval Postgraduate School (NPS) Field Experimentation Cooperative Tactical Network Testbed. Our effort was aimed at

Warfighters testing the prototype provided us with positive feedback, as well as a list of suggested features for future prototypes.

In February 2013, we demonstrated the capabilities of eMontage at the Camp Roberts' NPS's Joint Interagency Field Exploration (JIFX). This event explored the potential of emerging capabilities to address challenges faced by warfighters and first responders. Our demonstration pulled geotagged data for Hurricane Sandy from the Wireless Emergency Alert System, Twitter, Flickr, and Foursquare. We created mashups of the data that blended eyewitness information, photographs, and other information about affected areas in realtime during the hurricane. At that event, we received vital feedback from first responders, including the Federal Emergency Management Agency and the Department of Homeland Security.

Our initial aim with eMontage was to develop a capability that would allow warfighters and emergency responders on the tactical edge to easily and quickly integrate tactical information sources on their smartphones. We are working on improving the performance and security of eMontage by adding a caching mechanism and standard security mechanisms. We are also leveraging the eMontage architecture to design a prototype that will analyze streaming information (such as a Twitter stream or user location stream) at the edge in a project called Edge Analytics. Dr. Myers and Ms. Chang are also working to partially automate the "adding a new data source" to the eMontage workflow. We also plan to explore the integration of these research projects by running the eMontage server on a cloudlet and in conjunction with group context-aware mobile applications to guide the data filtering process.

We welcome your feedback on our work. Please leave feedback in the comments section below.

To view the presentation, eMontage: An Architecture for Rapid Integration of Situational Awareness Data at the Edge, which I presented with Ed Morris and Gene Cahill at SATURN 2013, please visit
https://resources.sei.cmu.edu/library/?

Send a Message to Soumya Simanta