The Challenges of Testing in a Non-Deterministic World

Many system and software developers and testers, especially those who have primarily worked in business information systems, assume that systems--even buggy systems--behave in a deterministic manner. In other words, they assume that a system or software application will always behave in exactly the same way when given identical inputs under identical conditions. This assumption, however, is not always true. While this assumption is most often false when dealing with cyber-physical systems, new and even older technologies have brought various sources of non-determinism, and this has significant ramifications on testing. This blog post, the first in a series, explores the challenges of testing in a non-deterministic world.

Before I get into these ramifications, it is important to clarify the scope of this post, which is strictly testing. Even though other verification-and-validation approaches (such as static and dynamic analysis, inspection, and review) are also useful and relevant when verifying non-deterministic systems and software, I will not address them here because testing is more than sufficient for multiple blog postings.

Specifically, testing compares a system's actual behavior with its expected behavior so that discrepancies (bugs) can be analyzed to uncover the underlying defects and thereby determine quality. Note that these discrepancies can be visible failures (incorrect visible behavior), as well as hidden faults (incorrect encapsulated mode, state, or data). Testing involves

As shown in the following figure, testability (i.e., the degree to which testing can be effective and efficient) requires meeting the following three prerequisites:

With the scope of this post clarified, we can now address the tester's assumption that systems and software behave in a deterministic manner and the ramifications of this incorrect assumption. Many developers and testers assume that tests are always repeatable because

In many modern domains, however, tests will not always yield the same result, and this makes testing much harder. Finding the resulting bugs that are rare, intermittent, and hard to reproduce, localize, and diagnose is the new challenge.

The following recent technology trends also increase the likelihood that these assumptions are false:

So far, I have been intentionally vague when it comes to the meaning of the words "non-determinism" and "non-deterministic." While I do not intend to use mathematical precision, a little more clarity would be useful.

Testers must be aware of and take into account four types of non-deterministic behavior based on the source of that behavior:

As shown in Figure 2 below, testers also must address non-determinism that occurs in 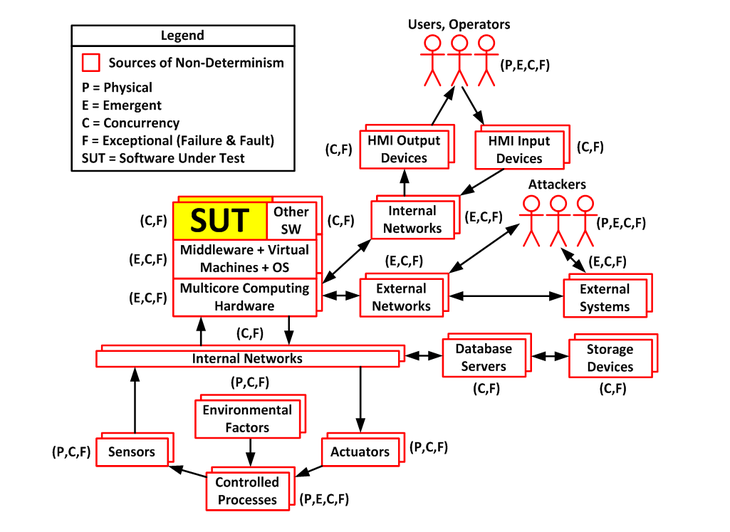 Non-deterministic systems are ubiquitous. As mentioned previously, they are found in all manner of cyber-physical systems:

Non-deterministic systems are common when dealing with modern hardware and software technologies, such as multicore processors, multiple processors (or computers or devices), virtual machines (VMs), multithreading and concurrent programming languages, and cloud computing.

Testing is largely about uncovering defects. When dealing with systems susceptible to non-deterministic behavior, developers and testers should pay special attention to the testing for the following types of non-deterministic defects when designing software and the associated test suites:

View my January 2016 webinar A Taxonomy of Testing Types.