In today's systems it's very hard to know where systems end and software begins. Software performs an integrating function in many systems, often serving as the glue interconnecting other system elements. We also find that many of the problems in software systems have their roots in systems engineering, which is an interdisciplinary field that focuses on how to design and manage complex systems over their life cycles. For that reason, staff at the Carnegie Mellon University Software Engineering Institute (SEI) often conduct research in the systems engineering realm. Process frameworks, architecture development and evaluation methods, and metrics developed for software are routinely adapted and applied to systems. Better systems engineering supports better software development, and both support better acquisition project performance. This blog post, the latest in a series on this research, analyzes project performance based on systems engineering activities in the defense and non-defense industries.

The Case for Systems Engineering

An understanding of the value of systems engineering is necessary to justify a project's investment in systems engineering resources and activities. In 2010, the DoD encouraged the National Defense Industrial Association (NDIA) and the SEI to develop a stronger business case for systems engineering by expanding on a 2007 survey of systems developers. We responded by conducting a new survey in collaboration with not just the NDIA, but other professional organizations including the IEEE-Aerospace and Electronic Systems Society, and the International Council on Systems Engineering (INCOSE). For this latest study, we surveyed 148 individual projects at organizations developing systems to obtain answers to the following questions:

Although most of the surveyed projects supply systems for the U.S. defense sector, we also received some responses from organizations serving other market sectors and operating in different countries.

We distributed a questionnaire that collected information from participating projects along three dimensions: 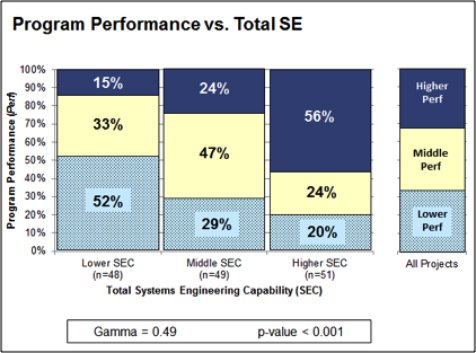 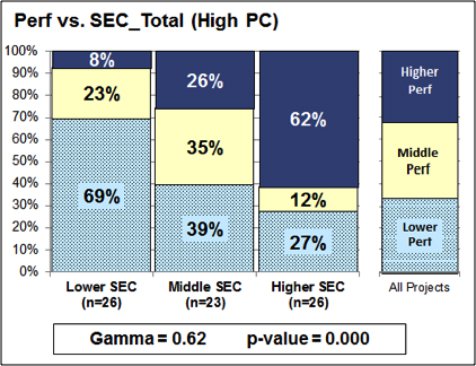 In our latest research, we revisited this data to study differences between projects in the defense and non-defense domains. We wanted to know if there were differences in the application of systems engineering, the performance of projects, and the effectiveness of the applied SE. Our aim with this most recent analysis was to identify best practices in one domain that could be transplanted to the benefit of the other domain. 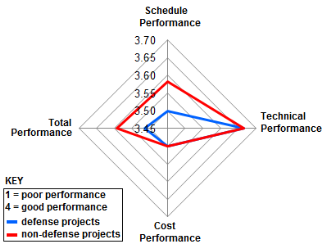 We examined the degree to which systems engineering was deployed among defense and non-defense projects. We measured deployment of SE practices on a scale of 1 (little SE deployment) to 4 (significant SE deployment). We also examined both the total SE applied to the project, and the SE applied in specific areas such as product architecture development, requirements, and verification. As shown in the figure below, we found that, for almost all specific areas, non-defense projects performed less systems engineering than defense projects. 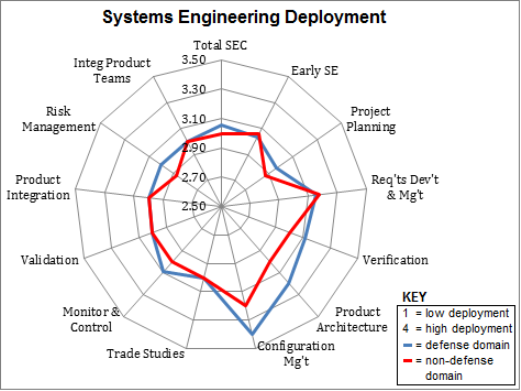 When we analyzed the relationship between SE deployment and project performance, we found results similar to those of the initial study. In both the defense and non-defense domains, projects that deployed more SE delivered better performance. However, we also found that most of the relationships between SE deployment and project performance were stronger in the non-defense domain than they were in the defense domain. Thus, the non-defense projects seem to getting a larger return from the SE investments. This result is shown in the figure below. 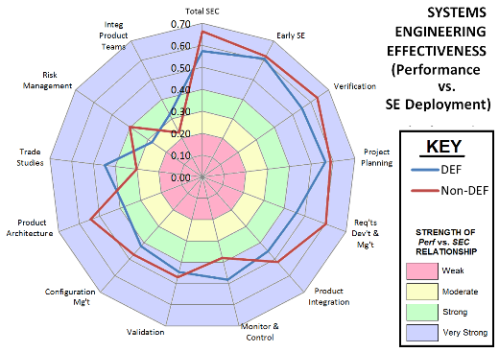 The findings of our analysis are summarized as follows:

The data we have collected does not provide any insight into the root causes of these differences; it merely indicates a measurable difference. These differences may be the result of an evolutionary construct. Perhaps non-defense projects are adopting new development technologies more rapidly than defense projects. Or the difference could be attributed to the processes that defense projects follow. Further study of these questions may identify processes and practices that can be transplanted from the non-defense domain to the defense domain to produce improved performance and acquisition in the Department of Defense.

We welcome your feedback on this research in the comments section below.

The technical report The Business Case for Systems Engineering: Comparison of Defense-Domain and Non-Defense Projects, can be downloaded at
https://resources.sei.cmu.edu/asset_files/SpecialReport/2014_003_001_91760.pdf.

The technical report The Business Case for Systems Engineering may be downloaded at
https://resources.sei.cmu.edu/library/asset-view.cfm?assetID=34061.

Send a Message to Joseph Elm

Send a Message to Joseph Elm

The Value of Systems Engineering