The Government Accountability Office (GAO) recently reported that acquisition-program costs typically run 26 percent over budget, with development costs exceeding initial estimates by 40 percent. Moreover, many programs fail to deliver capabilities when promised, experiencing a 21-month delay on average. The report attributes the "optimistic assumptions about system requirements, technology, and design maturity [that] play a large part in these failures" to a lack of disciplined systems engineering analysis early in the program. What acquisition managers do not always realize is the importance of focusing on software engineering during the early systems engineering effort. Improving on this collaboration is difficult partly because both disciplines appear in a variety of roles and practices. This post, the first in a series, addresses the interaction between systems and software engineering by identifying the similarities and differences between the two disciplines and describing the benefits both could realize through a more collaborative approach.

Software engineers today have adopted many of the principles and practices of systems engineering. For example, developers do not merely react to requirements; they elicit, prioritize, and negotiate changes to them. Developers do not just build code; they architect it, plan it, and establish rules to ensure data is appropriately shared and processed. Software project managers do not just distribute development tasks among individual coders and hope they integrate a seamless final product; they ensure that developers collaborate using plans, processes, and daily standup meetings. Software engineers do not just write programs; they design modular pieces, define integration principles, build for interoperability and modifiability, and perform integration testing.

Meanwhile the systems whose development programs employ systems engineers are increasingly dependent on and controlled by software. For example, the effort to write and maintain software on fighter aircraft now exceeds all other costs. Systems engineers are responsible for ensuring that every part of the system works with every other, and because software represents the intelligence of human-made systems, it is especially important to the integration of the system. Yet many chief systems engineers and program managers have had more experience in mechanical or electrical engineering than in software or software engineering. 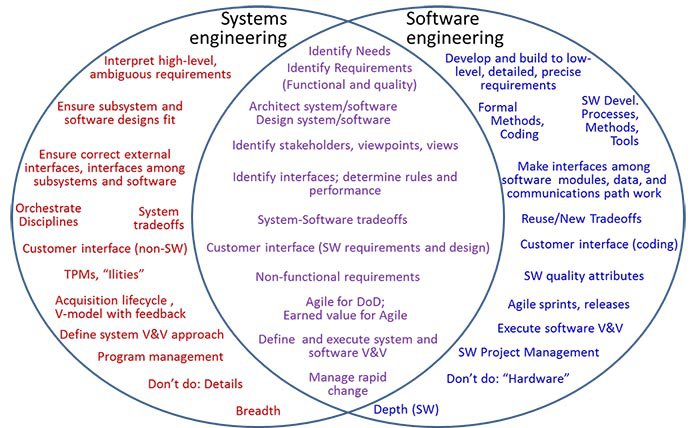 It's important to note in the figure above that systems engineers' responsibilities tend to be broad but not deep, certainly not deep in software. Conversely, while software engineers' responsibilities, may be broad across the software, they are deep in areas necessary to create working code. While most of the comparisons in the figure are fairly intuitive, three points require some elaboration: customer interface, non-functional requirements, and what each group does not do.

To ensure that future software-reliant systems (and systems of systems) can be built effectively, a new collaborative relationship between systems engineering and software engineering must become the norm. Moreover, there is a clear and compelling need to understand which roles must be filled by which types of professionals and which actions must be performed to ensure the two disciplines work together effectively. Improving the relationship will require overcoming the negative emotions that sometimes appear. (Both groups at a talk on systems and software that I presented at INCOSE Three Rivers Chapter in July 2013 agreed that the others "are arrogant and not as smart as they think they are.") By learning to work together effectively, systems engineers and software engineers can help increase the probability of success of new and planned ultra-large-scale software-reliant systems and systems-of-systems. In particular, they must understand each other's strengths and objectives and work together to support them.