Eliminative Argumentation: A Means for Assuring Confidence in Safety-Critical Systems

Software used in safety-critical systems--such as automotive, avionics, and healthcare applications, where failures could result in serious harm or loss of life--must perform as prescribed. How can software developers and programmers offer assurance that the system will perform as needed and with what level of confidence? In the first post in this series, I introduced the concept of the assurance case as a means to justify safety, security, or reliability claims by relating evidence to the claim via an argument. In this post I will discuss Baconian probability and eliminative induction, which are concepts we use to explore properties of confidence that the assurance case adequately justifies its claim about the subject system.

The Case for Confidence

Assurance cases are now becoming a standard practice in the development and deployment of safety-critical systems. In May 2013, at the First International Workshop on Assurance Cases for Software-Intensive Systems, it was stated that

It is impossible to examine every possible circumstance covered by an assurance case. One approach to the problem of achieving confidence in an assurance case is to provide a parallel argument that gives reasons why the assurance case should be believed. Hawkins, Kelly, Knight and Graydon have taken this approach with their concept of the "confidence case."

We have taken a different approach. Consider the following notional assurance case arguing that the system is safe (taken from the first posting in this series): 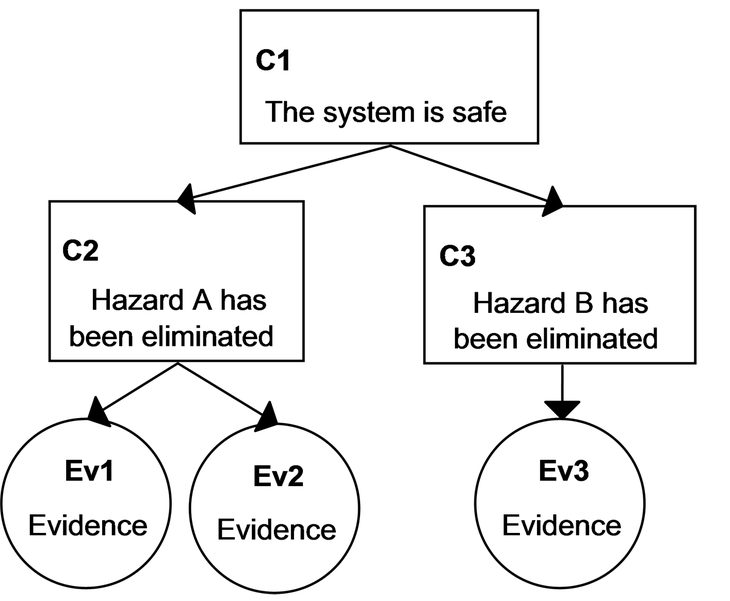 We want to be able to understand how the evidence (Ev1...Ev3) leads to confidence that the claim (C1) holds and by how much. We would also like to understand what "confidence" in the claim means, and how existing confidence can be increased. The remainder of this post will focus on a more detailed description of Baconian probability and eliminative induction.

For example, consider a person coming into a room and turning on a light.

Eliminative induction in contrast to enumerative induction looks for reasons to doubt the hypothesis. So our person deciding whether to believe a light will go on when he throws the switch will have to consider reasons why it might not, and then eliminate them.

Eliminative Argumentation and the Confidence Map

Reasoning about doubts in an argument is a use of defeasible reasoning. A defeasible argument is always subject to revision as we learn more about the claims and evidence that form the argument. There are only three kinds of doubts relevant to an assurance case: we can doubt claims, we can doubt evidence, and we can doubt the inference between claims or between two claims or between a claim and its supporting evidence. We show these doubts explicitly in a modified assurance case-- a confidence map. 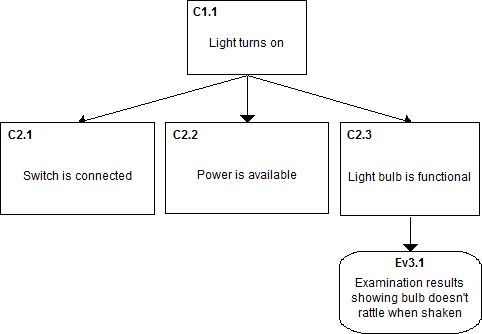 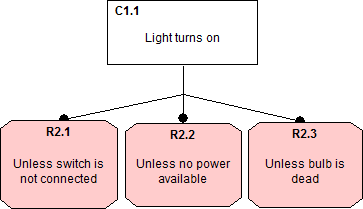 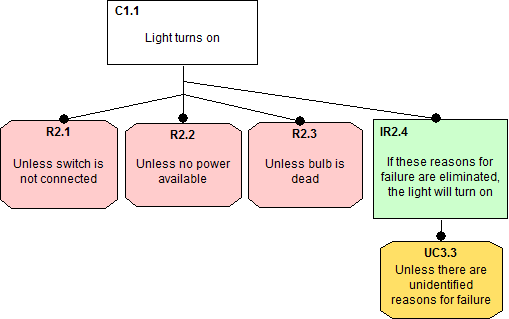 Figure 4: Adding an inference rule and attacking it via an undercutting defeater

The confidence map now makes the inference explicit and adds an additional undercutting defeater, namely UC3.3, which raises a doubt about the sufficiency of the inference rule. 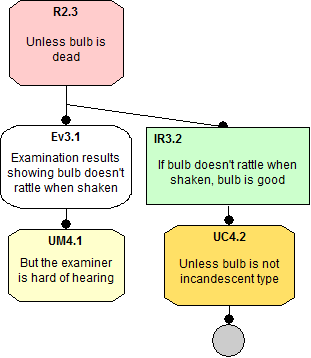 Figure 5: Attacking the evidence via an undermining defeater

Figure 5 expands one leg of the confidence map to show the evidence that is being used to eliminate defeater R2.3, namely that the bulb does not rattle when shaken. A rattle would indicate a broken filament. The figure also shows an example of an undermining defeater--one that questions the evidence by suggesting that the person shaking the bulb may be hard of hearing. It also includes a second inference rule (that if a bulb does not rattle then it is good), which is undercut by a defeater suggesting that the bulb may not be incandescent, and therefore the absence of a rattle may be meaningless. The grey circle under the undercutting defeater indicates that we have assumed that the bulb is, in fact, incandescent and will consider that defeater to be eliminated without any further analysis.

Of course this does not represent a complete confidence map, even for the elimination of R2.3. For instance the bulb may not rattle when shaken because the filament did not burn out, but merely was defective. 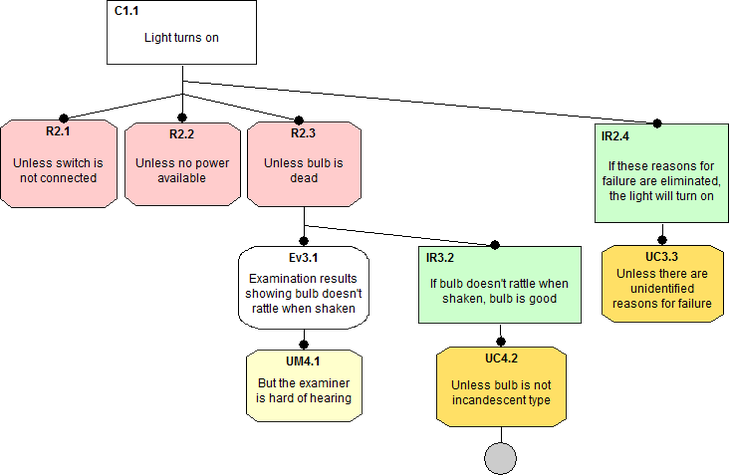 At the beginning of this post, I stated that one of our goals was to measure confidence. One way to go about this is to simply count defeaters near the leaves of the map and then count uneliminated defeaters. In Figure 6, I recap the confidence map as discussed. In this example, we have eliminated one defeater (UC4.2 as indicated by the grey circle) out of a total of five. Expressed as 1|5, this is an example of Baconian probability (named after Sir Francis Bacon, who first proposed the idea of measuring degrees of certainty). Note that the Baconian probability is not a ratio and cannot be reduced. 1|5 is read "one out of five" while 2|10 would be read "two out of ten" a very different level of doubt: in the first case there are four unresolved doubts, whereas in the second there are eight.

We can increase our confidence in C1.1 by eliminating additional defeaters. For instance, if the examiner has recently undergone a hearing test, we could eliminate UM4.1.

It may be hard to completely eliminate a defeater. Suppose we know little about the light bulb examiner, but we know that 1 percent of the population as a whole will have trouble hearing a rattle in a defective light bulb. Shouldn't we be able to mostly eliminate defeater UM4.1 on that basis? That and related topics will be discussed in the next article in this series.

To read the SEI Technical Report, Toward a Theory of Assurance Case Confidence, please visit
https://resources.sei.cmu.edu/library/asset-view.cfm?assetid=28067