Although the vast majority of military missions require the successful collaboration of multiple cyber-physical systems within an overall system of systems (SoS), almost all system and software architects work on programs developing or sustaining individual systems and subsystems. Often, they do not sufficiently understand the ramifications of how their system interoperates with these other systems to accomplish the overall mission. The lack of an end-to-end (E2E) mission thread analysis leads to numerous difficulties, such as integration problems that are not identifiable if one merely looks at one's own system and the specifications of its individual interfaces.

System, network, and software architects face many challenges when architecting their system within a system of systems:

As its name implies, the EMDA method is based on the concept of a mission thread. Because the term, mission thread, is often used loosely with multiple meanings, I will begin by clearly defining what it means in this series of blog postings.

An individual mission thread is a single, contiguous, E2E sequence of interactions (i.e., data flows) between pairs of architectural components and actions performed by these architectural components. The components can be systems in the SoS, their subsystems, individual software and hardware configuration items (CIs), and line replaceable units (LRUs). Figure 1 documents a mission thread metamodel with mission-thread-specific concepts highlighted in green. 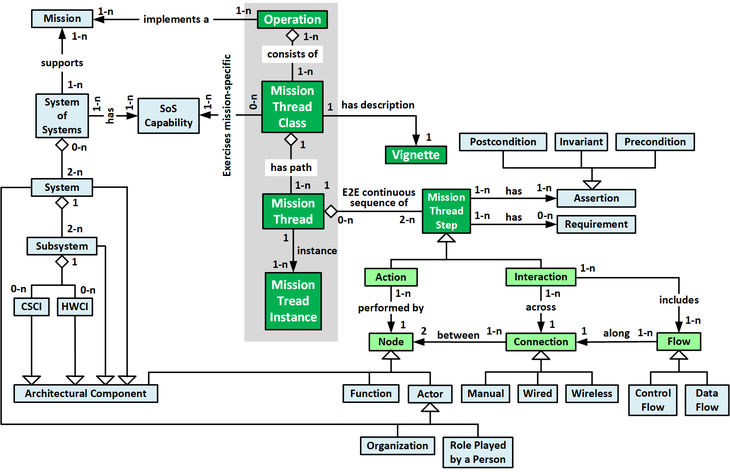 Figure 2: Comparison of Mission Threads and Use Cases

As an example, consider the following two fictional system development programs. One program is developing an autonomous vehicle, such as a UAV, unmanned surface vehicle, or lunar rover. The other is developing its control system, which is located on a platform, such as an aircraft, ship, or space station. As shown in Figure 3, an unmanned vehicle's operator sitting at an operator console learns that the vehicle's mission plan needs to be updated (e.g., because of a change in mission, new threat data, changing weather conditions, or a change in the platform's course). 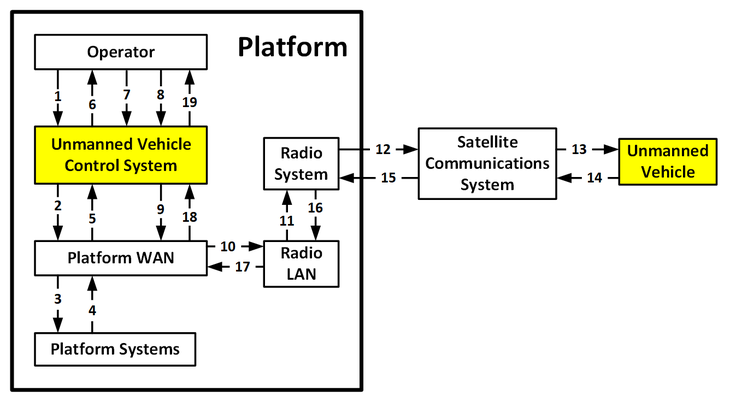 The top-level E2E data flow diagram in Figure 3 summarizes the example mission thread at the SoS level. However, it grossly under-identifies the number of architectural components and message hops between components that are required to implement the mission thread. Except for the human operator, each of the nodes in Figure 1 would include numerous smaller nodes.

Clearly, a more detailed E2E DFD is needed, one that shows how data (and control) flows through the relevant components of the individual systems. Figure 4 shows what such a detailed diagram might look like. Note that because such a detailed diagram contains sensitive information that could be used by an adversary to attack an SoS, the following diagram is strictly notional and has no relationship to Figure 3. 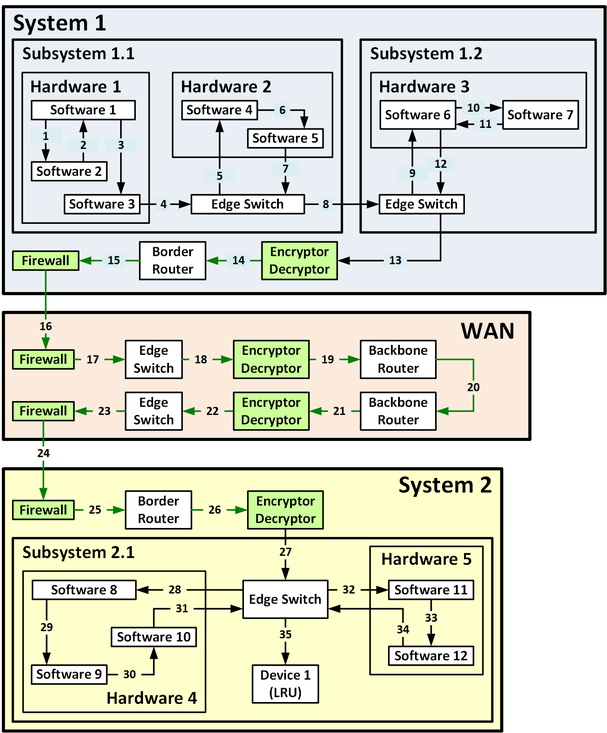 An actual E2E DFD is a valuable tool for cybersecurity analysis. In Figure 2 for example, green is used to indicate security components (e.g., encryptors and firewalls) as well as the data flows protected by encryption, digital signatures, and hash codes. On an actual diagram, the specific network devices and encryptors would be identified and annotated. For example, it might show multiple levels of encryption and decryption to protect data in transit, provide packet-level encryption for communications security (COMSEC), provide bulk encryption for transmission security (TRANSEC), and provide adequate cybersecurity defense in depth.

In real life, the resulting E2E DFD would be relatively large and complex, potentially involving more than 50 hops between nodes. Since an adversary could potentially attack any node or arc in the diagram, they represent potential parts of the overall attack surface of the SoS. For this reason alone, an actual E2E DFD would be highly sensitive; it might be labeled For Official Use Only (FOUO) and might even be classified. The sensitive nature of these diagrams is the primary reason that I have not provided a more complete example in this blog post.

Starting with the architecture engineering challenges it was developed to address, this blog post has provided an overview of the E2E Mission Thread Data Flow Analysis (EMDA) method including its work products and the process used to create and verify them. The next blog post in this series will discuss the benefits of the method, challenges that need to be addressed while implementing the method, and lessons that were learned during the use of this method on a US military program.