Hey, it's Will. I was recently working on a proof of concept (PoC) exploit using nothing but the CERT BFF on Linux. Most of my experience with writing a PoC has been on Windows, so I figured it would be wise to expand to different platforms. However, once I got to the point of controlling the instruction pointer, I was surprised to discover that there was really nothing standing in the way of achieving code execution.

Without requiring additional work beyond doing a BFF minimization to Metasploit string, it was easy to tell what bytes were under my control and how I could get there: 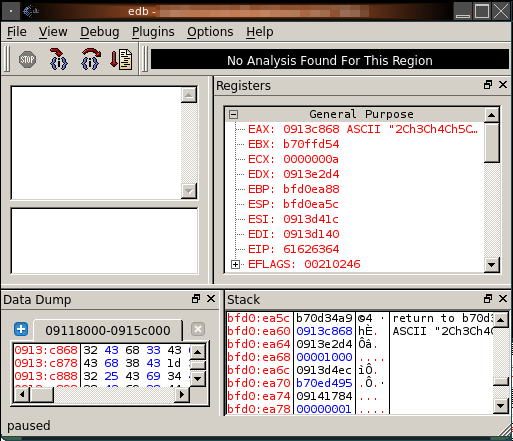 Home run! I had control of EIP (0x61626364 = "abcd"), I had a Metasploit string pattern, and also have a register that pointed there (EAX). Let's look at the memory protections for that location:

Well that can't be right, can it? The heap has Read, Write, and Execute permissions. It is a dangerous condition when any memory location is both writable and executable. Why is that? Using the case above as an example, this condition allows an attacker to simply jump to and execute bytes that are considered to be just data. NX will not come into play if a memory region is marked as executable. (See also OpenBSD's W^X policy.)

It took a little more digging to find out why the heap was executable. The platform that I'm using is UbuFuzz, which is Ubuntu 12.04.01 using an x86 Linux 3.2.0 kernel. On this platform if an executable stack is specified, such as by compiling the application with the gcc -z execstack option, the READ_IMPLIES_EXEC personality is set for the process. As is perhaps obvious by the name, memory locations that are readable are by default executable when this personality flag is set, including the heap.

The crashing process in question does not specify an executable stack in its ELF header, though:

If this process does not specify that it will have an executable stack, how did it end up with the READ_IMPLIES_EXEC personality? It doesn't explicitly use the personality() function either. Here's where things get a little strange. The process that crashes is not invoked directly from a terminal, but rather it is spawned from a different application. Let's look at the stack properties specified by the parent executable:

On a vanilla Linux platform, it may be difficult to statically determine which exploit mitigations may be enabled for any given process. With Linux on the x86 platform in particular, any given process may run without NX protections simply due to the properties of its parent process.

Thanks to The Pax Team and Sebastian Krahmer of SUSE for helping me with this topic!