An Introduction to the Mission Thread Workshop

In Department of Defense (DoD) programs, cooperation among software and system components is critical. A system of systems (SoS) is used to accomplish a number of missions where cooperation among individual systems is critical to providing (new) capabilities that the systems could not provide. SoS capabilities are a major driver in the architecture of the SoS and selection of constituent systems for the SoS. There are additional critical drivers, however, that must be accounted for in the architecture that significantly impact the behavior of the SoS capabilities, as well as the development and sustainment of the SoS and its constituent systems' architectures. These additional drivers are the quality attributes, such as performance, availability, scalability, security, usability, testability, safety, training, reusability, interoperability, and maintainability. This blog post, the first in a series, introduces the Mission Thread Workshop (MTW), and describes the role that it plays in assisting SoS programs to elicit and refine end-to-end SoS mission threads augmented with quality attribute considerations.

A mission thread is a sequence of end-to-end activities and events presented as a series of steps that accomplish the execution of one or more capabilities that the SoS supports. Simply listing the steps and describing them, however, does not reveal all the important concerns associated with cooperation among the systems to accomplish the mission and their ensuing behaviors. Articulating and understanding the architectural considerations associated with the mission threads are therefore critical to identifying any architecture mismatches between systems and the SoS. Mission threads must be augmented with quality attribute considerations.

A mission thread takes place in the context defined by a vignette. The purpose of a vignette is to describe those environmental factors that may be architecturally significant--that is, they impose a constraint on the architecture that would not exist in the absence of these environmental factors. This story can usually be told in a paragraph or two, with an accompanying context diagram showing the nodes containing the systems.

Through our work on a number of SoS and commercial enterprise architectures within the DoD, we have identified three basic types of mission threads:

The following examples present an operational vignette for ballistic missile defense in a naval context:

Two ships (Alpha and Beta) are assigned to air defense to protect a fleet containing two high-value assets. A surveillance aircraft and four unmanned aerial vehicles (UAVs; two pairs) are assigned to the fleet and controlled by the ships. A pair of UAVs flying as a constellation can provide fire-control quality tracks directly to the two ships.

A two-pronged attack on the fleet occurs:

The fleet is protected with no battle damage.

An example mission thread (un-augmented) supporting the Ballistic Missile Defense vignette is provided in the following table; it serves as an input to the MTW, and will be augmented with quality attribute, engineering, and capability considerations during the MTW. 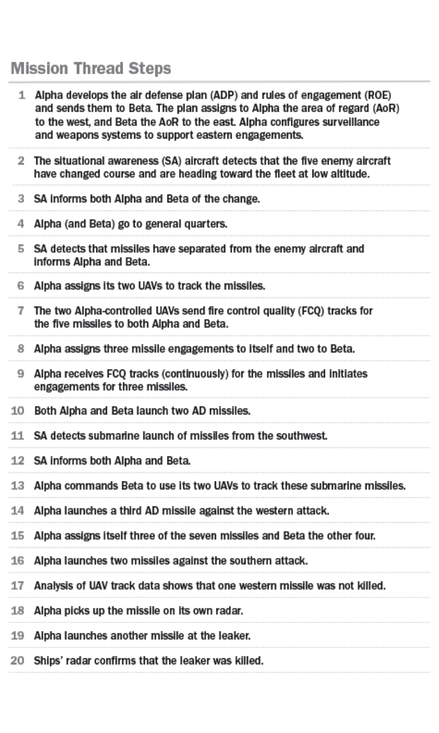 The MTW team uses these inputs to augment the mission threads with quality attribute considerations, as well as engineering and capability considerations, with participation from SoS and legacy system stakeholders. The other outputs from the MTW are the SoS challenges derived from the issues identified in the qualitative analysis. The augmented mission threads and challenges will drive important architectural decisions during architecture development. 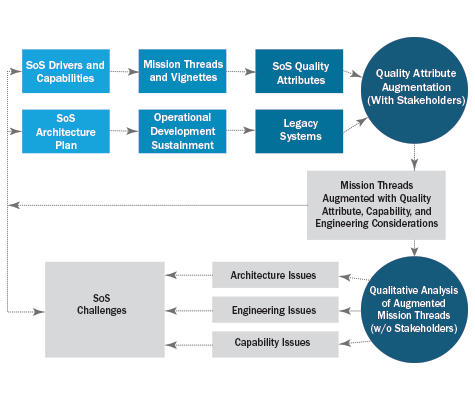 After performing more than 30 MTWs in the context of SoS programs, SEI researchers have observed several trends:

Overall, our experience in executing a number of MTWs for a variety of clients has been very positive. The clients all gained insight into the desired behavior of their SoS and constituent systems; identified architectural challenges, engineering challenges, and capability gaps; and defined architecture guidelines and principles to guide their development. These outcomes help a program avoid the costly consequences of development and operational failures and lead to more cost-effective and on-time delivery of new capabilities for the SoS.

This blog post is the first in a series on the MTW. Future posts will explore the steps of the MTW in detail and provide examples, experiences, and lessons learned in its application.

Shifting from Software Sustainment to Software Engineering in the DoD