A Tool to Address Cybersecurity Vulnerabilities Through Design

Increasingly, software development organizations are finding that a large number of their vulnerabilities stem from design weaknesses and not coding vulnerabilities. Recent statistics indicate that research should focus on identifying design weaknesses to alleviate software bug volume. In 2011, for example when MITRE released its list of the 25 most dangerous software errors, approximately 75 percent of those errors represented design weaknesses. Viewed through another lens, more than one third of the current 940 known common weakness enumerations (CWEs) are design weaknesses. Static analysis tools cannot find these weaknesses, so they are currently not addressed prior to implementation and typically are detected after the software has been executed when vulnerabilities are much more costly and time-consuming to address. In this blog post, the first in a series, we present a tool that supports a new architecture model that can identify structures in the design and code base that have a high likelihood of containing bugs, hidden dependencies in code bases, and structural design flaws.

Foundations of our Work

At the SEI, there has been extensive research in architecture analysis, and the techniques we had previously developed, such as the Architecture Tradeoff Analysis Method (ATAM), were manual and labor-intensive. Such techniques allowed us to broadly identify risks, but we wanted the ability to zoom in and try to find the specific architectural weaknesses or flaws in the code.

This post describes our work on a design representation, known as Design Rule Space (DRSpace), and associated set of tools (Titan) that allow us to reverse engineer an existing code base, extract architectural and design information, manipulate that information in interesting ways, and then analyze that manipulated form of the information to find architectural flaws. The approach we have developed is automated, which will save developers and researchers much-needed resources and time.

In late 2009 we began a collaboration with Yuanfang Cai and some of her doctoral students at Drexel University. We met at a conference, and we were both concerned by the lack of tool support for architecture analysis, and the lack of economic analysis of architectural decisions. We began to work together, and this collaboration has resulted in our tool, Titan, and a stream of very successful empirical research based on the growing capabilities of Titan.

Our work initially focused on development of a tool chain. On the left side of the tool chain are several artifacts. In addition to source code, these artifacts include the revision control system (e.g., Subversion or Git) that manages commits and releases etc. Our approach relies on the fact that virtually every software development projects uses issue tracking systems, for example, JIRA, to manage bugs and changes to the system. We realized that there is substantial information in these artifacts (issue tracking and revision control) that can provide valuable insights beyond code view into the design of a system and any potential sources of vulnerabilities.

We also examined information from enterprise architects that allowed us to conduct an analysis of the designs. This analysis highlighted dependencies between files that we viewed as triples: File A, File B, and some relation between them.

Using the information we obtained, we created a design structure matrix (DSM) where all the rows represent file names. Those file names are then duplicated in the same order in the columns. The diagonal in this matrix represents the self-dependency or self-relationship. Every cell in the matrix represents some dependency between file on the row and file on the column or no dependency if none exists. This structure allowed us to view a very compact representation of all the structural relationships that exist between the files.

Using that historical record we built a separate history DSM that allowed us to view history dependencies between files. For example, if a developer makes a change to fix a bug or implement a feature, several files might have to be changed simultaneously. This matrix allowed us to realize that if files A and B are checked in in the same commit to the revision history, then they have a history dependency.

Next, we clustered the matrix using design rule hierarchy (DRH), a DSM clustering algorithm where the lower layers depend on the higher layers and the modules in the same layers are independent of each other. As illustrated in the figure below, DRH reorders the rows and the columns so the most important files, the files that most others depend on, are at the top. Then, underneath those are files they depend on, and underneath those are the files they depend on, and so forth.

Our architectural representation known as Design Rule Space (DRSpace) is formed by selecting structural and evolutionary dependency relationships and then clustering them using the design rule hierarchy algorithm. 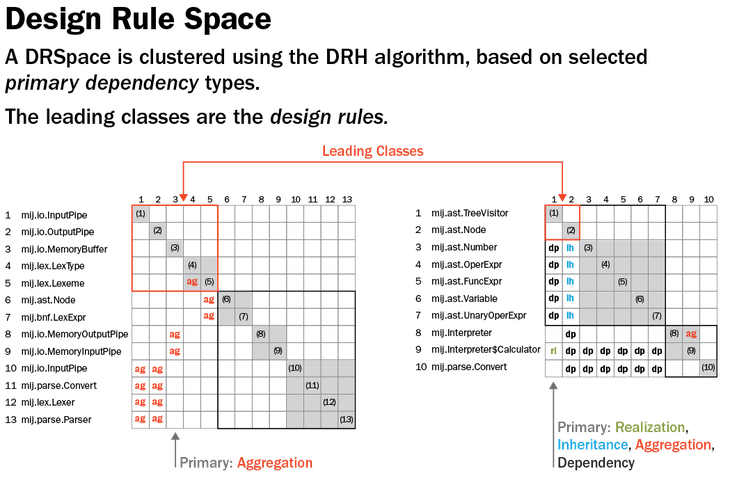 Analyzing the Matrix for Prototypical Flaws

We have now analyzed more than 150 projects (120 open source and 30 closed-source), written in C, C++, C#, Java, and PHP, using this tool chain. These projects cover a wide range of application domains, and range from modest size to the largest of software systems, such as operating systems, databases, web servers, and many others.

Having structured the project's DSM as a DRH, we can now examine it for prototypical flaws including

These last two violations, modularity violations and unstable interface, can only be identified if the structural and history information are combined. The history information, which consists of both changes and bugs, can be gathered and distinguished because we also relied on a third source of data: the issue tracking system. In modern, mature projects, when a change is committed to the revision control system, developers are required to include a note in the commit message that describes what issue from the issue tracking system that this change addressed. This feature is key to our approach because it allows us to distinguish commits to resolve bugs from commits to make changes for new features. This type of reporting is important because it allows us to distinguish different kinds of problems in the revision history and identify what problems are causing bugs, unnecessary amounts of changes, and other issues that can be pathological problems for a project, including excessive churn (the committed lines of code).

Transitioning to Our Stakeholders: The Department of Homeland Security and Beyond

The Department of Homeland Security (DHS) Science and Technology Directorate (S&T) provided CERT with funding to explore making the Titan tool and design representation available in the Software Assurance Marketplace (SWAMP). SWAMP, which went live in February 2014, was assembled from Indiana University's Center for Applied Cybersecurity Research, the NCSA Cybersecurity Directorate at the University of Illinois Urbana-Champaign, the University of Wisconsin-Madison Middleware Security and Testing group, and the Morgridge Institute for Research .

Most projects in our experience do not distinguish bugs as being security-based or not security based. With the SWAMP project we focused on implementing our design algorithm and Titan tool to identify security bugs in a system as well as changes made to implement security features.

Economic Analysis: A Return on Investment for Refactoring

Our recent research has shown that defective files seldom exist alone in large-scale software systems. They are usually architecturally connected, and their architectural structures exhibit significant design flaws that propagate bugginess among files. We call these flawed structures the architecture roots, a type of technical debt that incurs high maintenance penalties.

Using our DRSpace approach and Titan tool we were able to examine projects for different classes of files. For example, we can examine a part of a project with zero design flaws and zero structural flaws and calculate the bug rate and change rate. Next, we can examine the bug rate and change rate in problematic areas of a project. This analysis allows us to calculate the benefits if architectures were to break the cyclic dependencies by refactoring the project to remove the modularity violations and other issues.

Removing the architecture roots of bugginess requires refactoring, but the benefits of refactoring have historically been difficult for architects to quantify or justify. Working with researchers from Drexel, we recently applied our approach to identify and quantify such architecture debts in a large-scale industrial software project. This application and the economic case we were able to make for refactoring will be described in the next blog post in this series.

Architecture problems lead to quality issues. The approach that we have devised allows us to bridge the gap between architecture and quality. Using the Titan tool and the DRSpace-based analysis approach we can more accurately pinpoint design flaws including

We welcome your feedback on this approach in the comments section below.

On a separate front, the Titan software is being licensed by Drexel, and is available for academics. For more information, please visit http://drexel.edu/commercialization/about/contact/.

View the talk that Rick Kazman gave on this research called Locating the Architectural Roots of Technical Debt at the 2015 Saturn Conference.

Send a Message to Rick Kazman

Send a Message to Rick Kazman

Send a Message to Carol Woody

Send a Message to Carol Woody